Yet again, Hidden Vale Adventure Park delivered an exceptional 24 Hour event to kick off their racing calendar. We were so pleased to invite Emma Rhymer to share the experience of her first ever 24hr event! Please enjoy this inspiring wrap-up below. 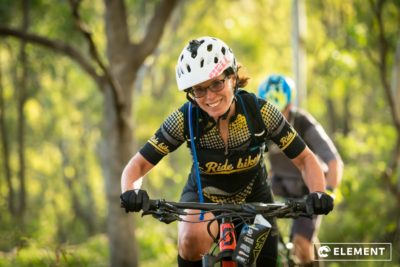 “I took up mountain biking 4 1/2 years ago, after going on a ride during a school camp. I loved it and didn’t let the fact that I had barely learnt to ride a bike stop me. Three months later I met Dylan, who was coincidentally a keen mountain biker, & he’s been an amazing support ever since. Living in Toowoomba at the time, I joined in with the kids’ coaching sessions that Rod Hickey used to run through TMBC and then got coaching from John Pinnell in my efforts to keep up with Dylan on the trail. I began racing purely as a way of improving my skills, but it also unleashed my inner competitive spirit – and I haven’t looked back since.”

In 2018, Dylan & I completed the Merida Hidden Vale 4HR – & loved it. As we drove home, we commented that the 24-hour riders would still be going. As we ate dinner, we shook our heads in disbelief that the 24-hour riders were still out on track. As we sipped our Sunday morning coffees, we congratulated ourselves on being sane enough to ‘just’ ride the 4-hour. As we prepared our lunch on Sunday we tried to fathom the enormity of only just finishing a race that had begun at lunchtime the day before. 24-hour racers were completely bonkers, we concluded.

The following Tuesday I told Dylan I’d really like to try riding a 24-hour race. 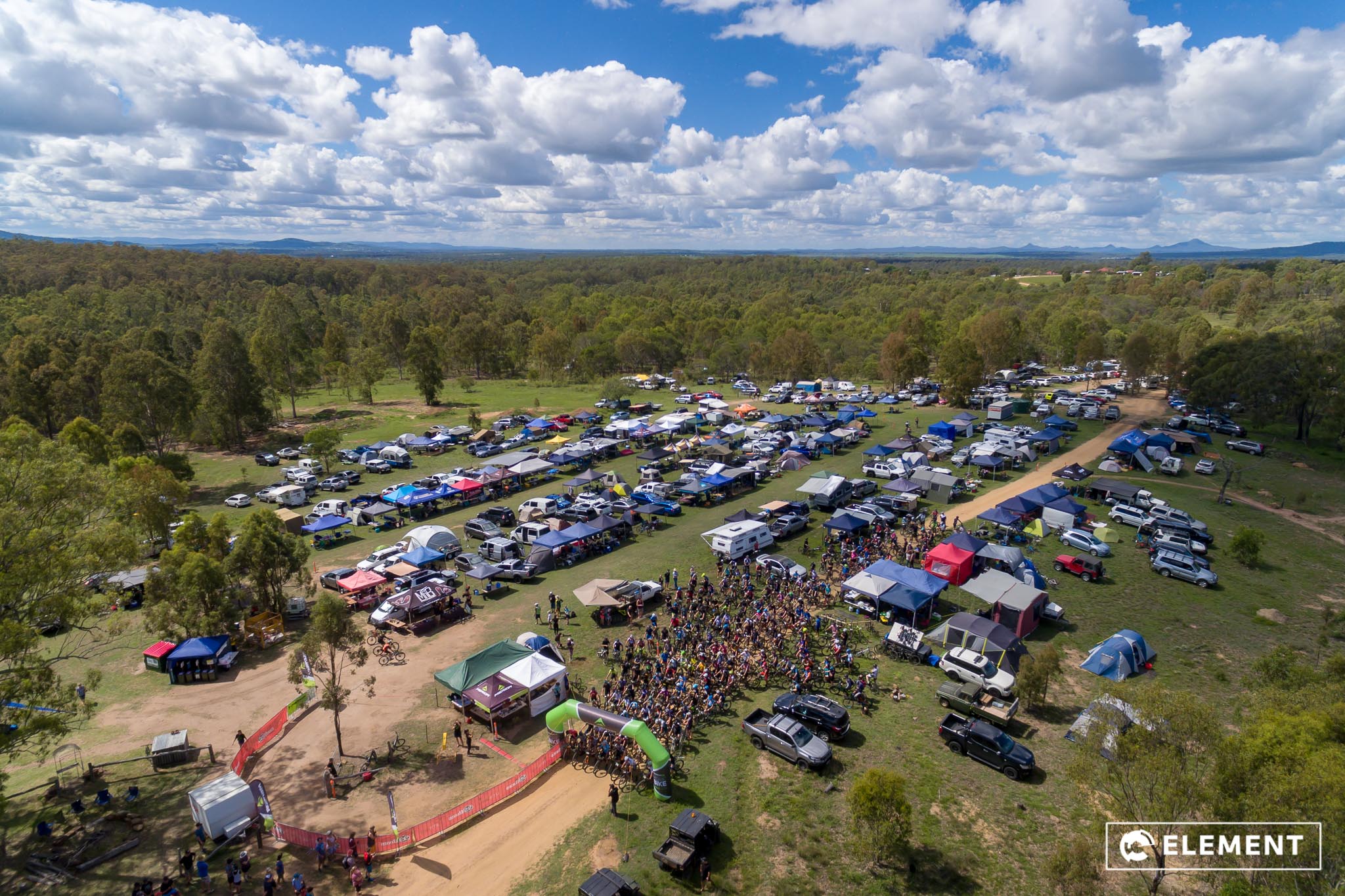 Fast forward to 2019, & I nervously lined up to complete the Merida Hidden Vale 24HR. I’d prepared as well as I could, following Jodie Willet’s BikeRiteMtb training plan over the previous year, getting advice on carb loading and race fuelling from Dietitian Approved and having ‘Emma’s 24hr Blend’ specially prepared by Infinit Nutrition. I worked on my skills, getting coaching with John Pinnell when I could, and upgraded my bike with iRide Bikes in Toowoomba. I sought advice on how to ride for 24 hours and Dylan sought advice on how to be the perfect one-man pit crew; we were both touched by the generosity of people near and far as they freely offered the insights they’d picked up along the way. I left absolutely no stone unturned in pursuit of this crazy goal! But I was still nervous – I knew it was going to be tough and hoped that my physical and mental strength were up to the challenge. 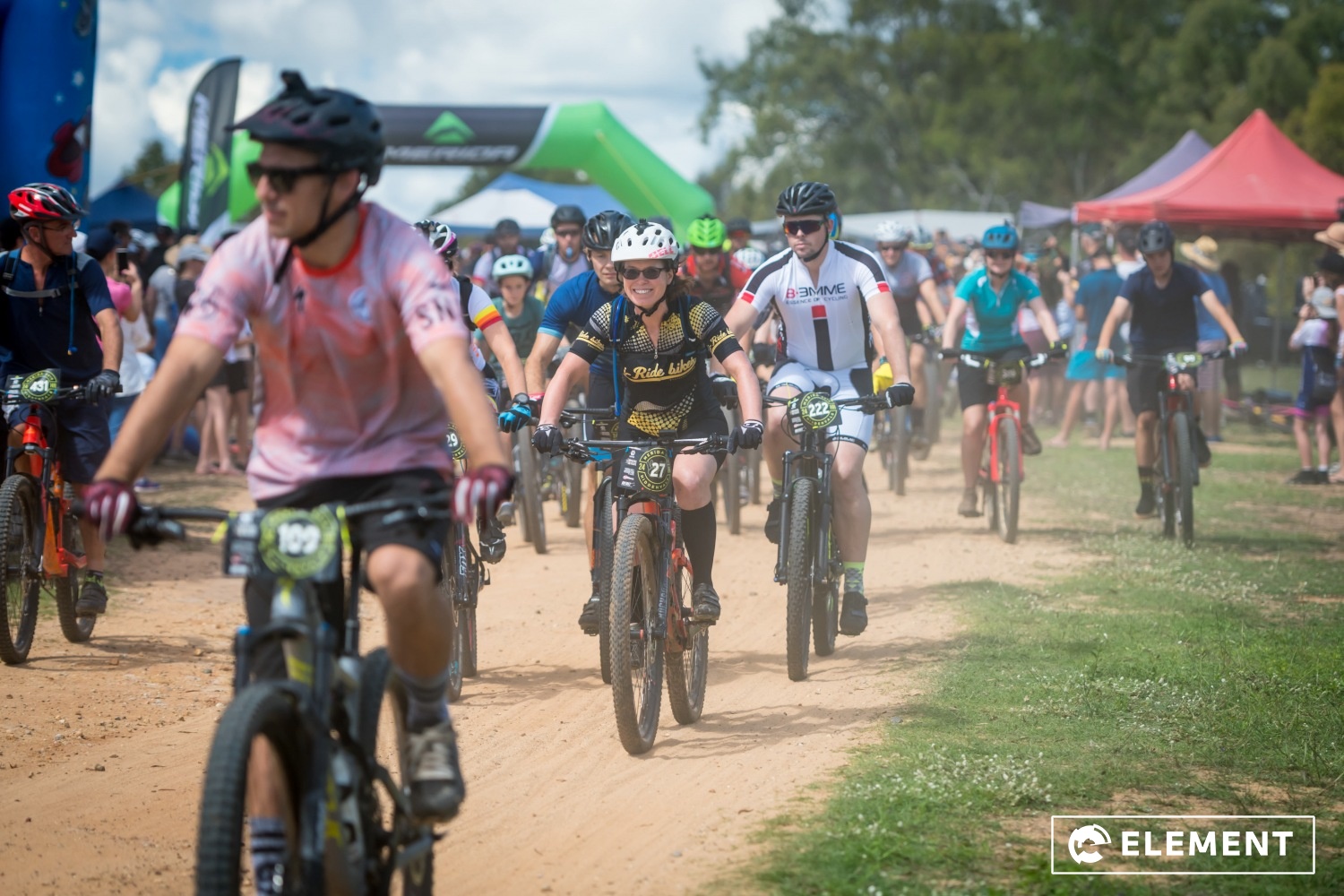 Looking back, the first four hours of the race now seem to have flown by. Dylan completed the 4-hour and elected to ride with me rather than to ‘race’, which I appreciated. I really do quite enjoy racing and I’d get caught up in the moment, start attacking a climb or trying to catch a rider in front, and then I’d hear Dylan’s voice calmly suggesting I check my heartrate. 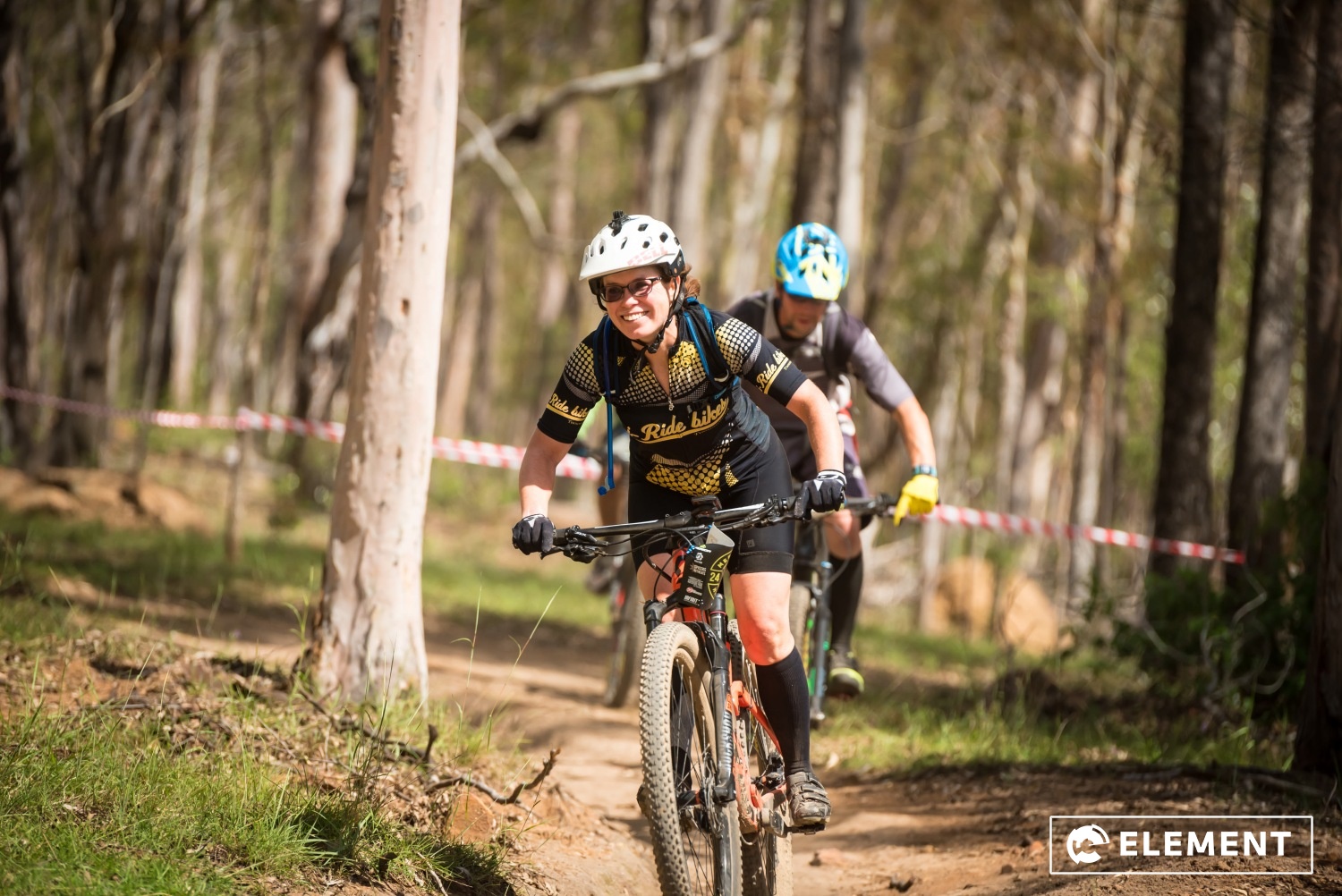 Remembering to keep my heart rate low and ‘ride my own race’ certainly proved to be my biggest challenge during those first four hours – but it was advice I’d been given repeatedly so I knew I had to follow it. After a summer of Wild West XC racing, this was harder than it sounds! 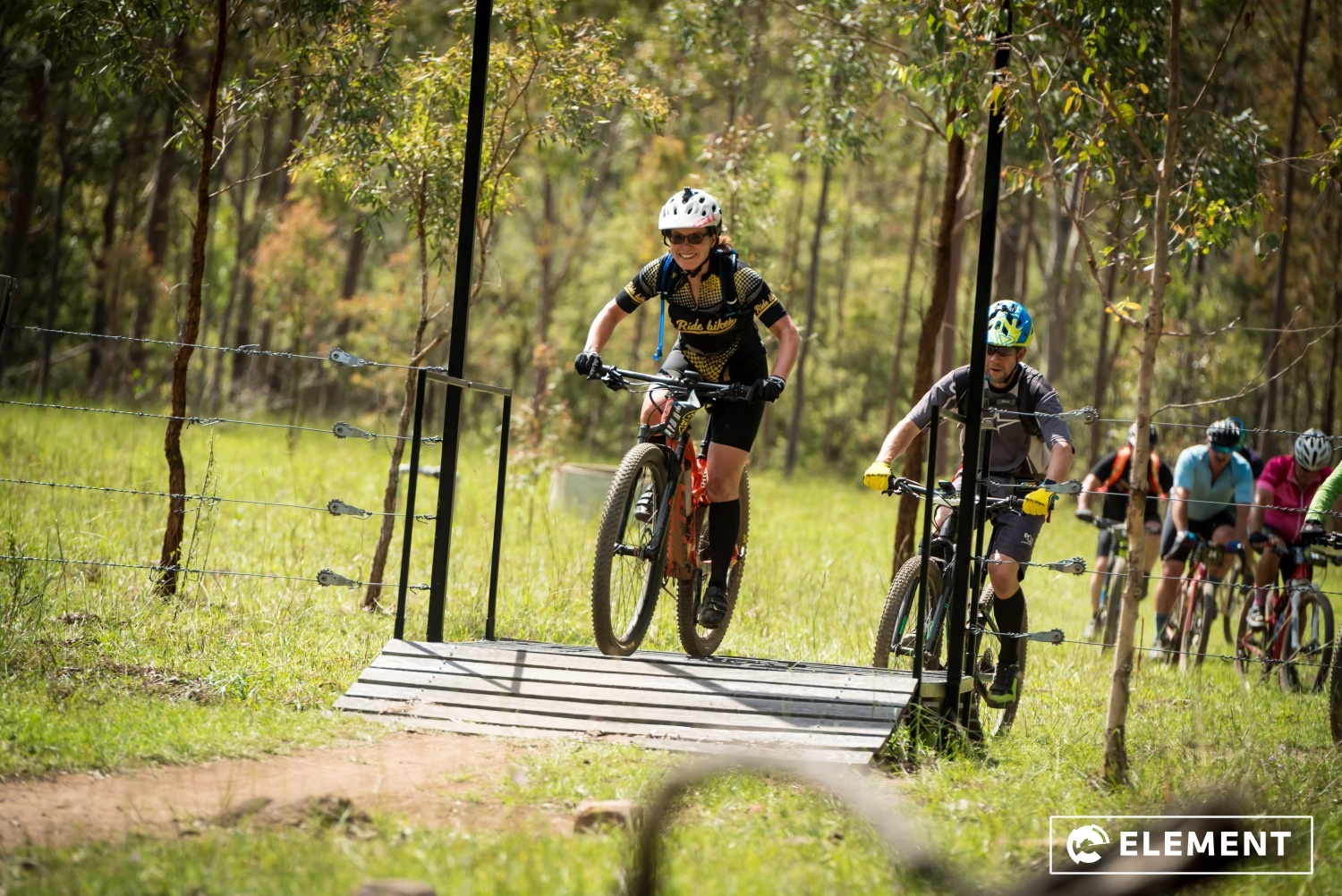 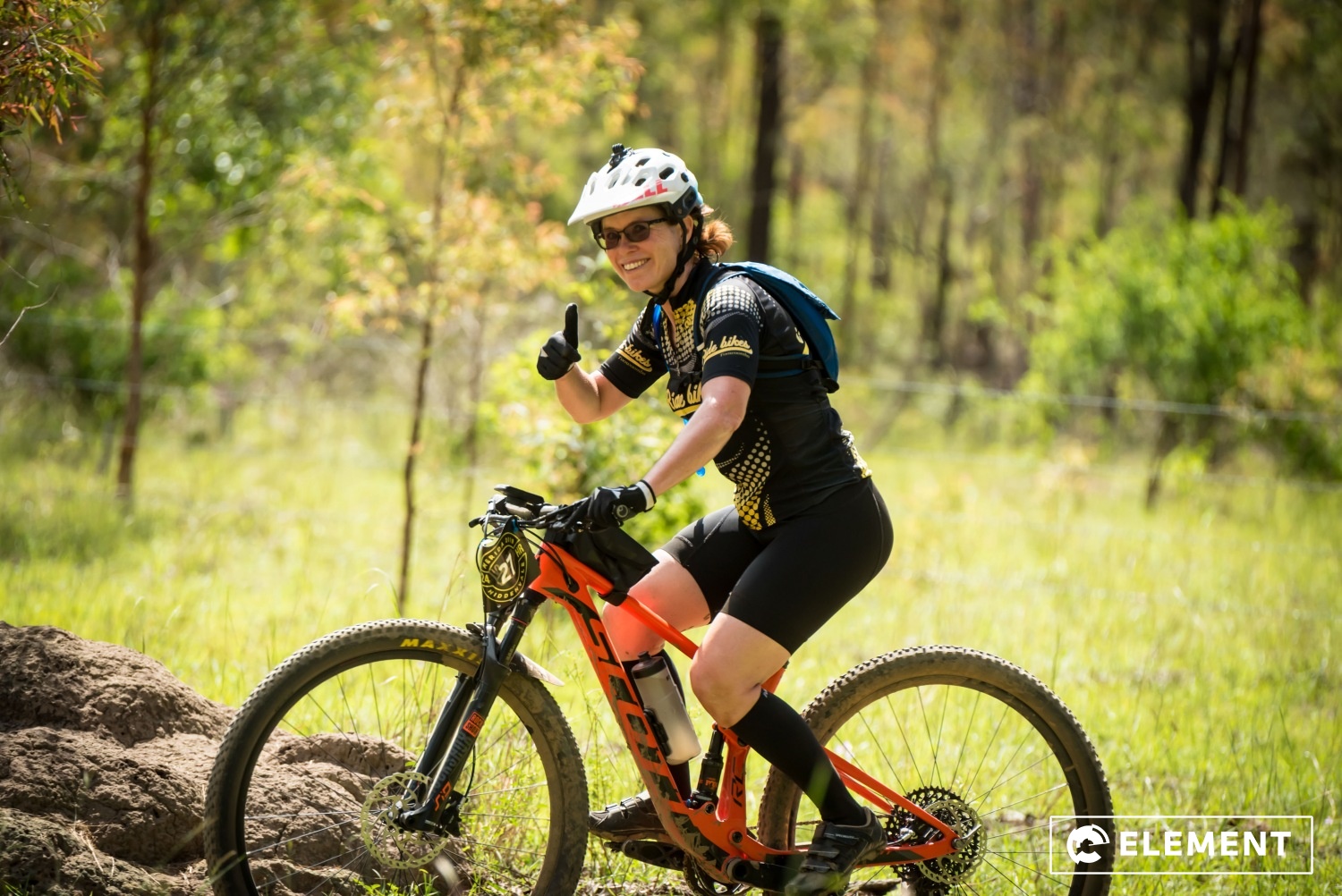 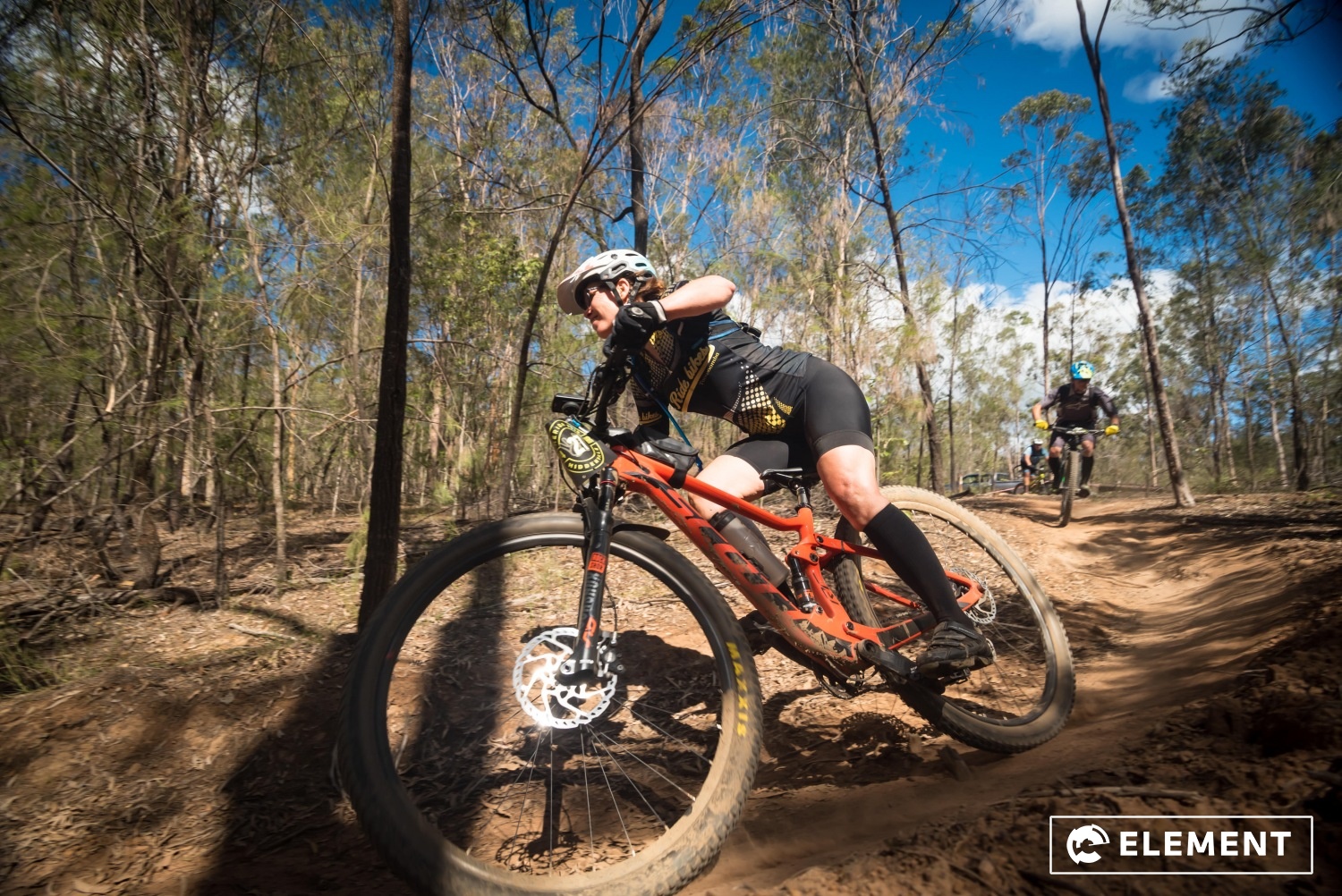 At the end of our 4th lap I continued on alone, adjusting to the deepening shadows, relishing in the moment and counting down to dinner. Having a hot spaghetti bolognese to look forward to is very motivating!

Once darkness fell the course changed into a magical nocturnal world. Spiders scuttled about in the undergrowth, their eyes sparkling emerald green in my lights. A brush-tailed phascogale (I had to look it up, very cute!) calmly watched me make my way slowly up a hill. Serenading frogs by the dam marked the start of the long climb back to pit lane (and more food). I swear I even saw the Easter Bunny out on track, but maybe I was hallucinating by then? 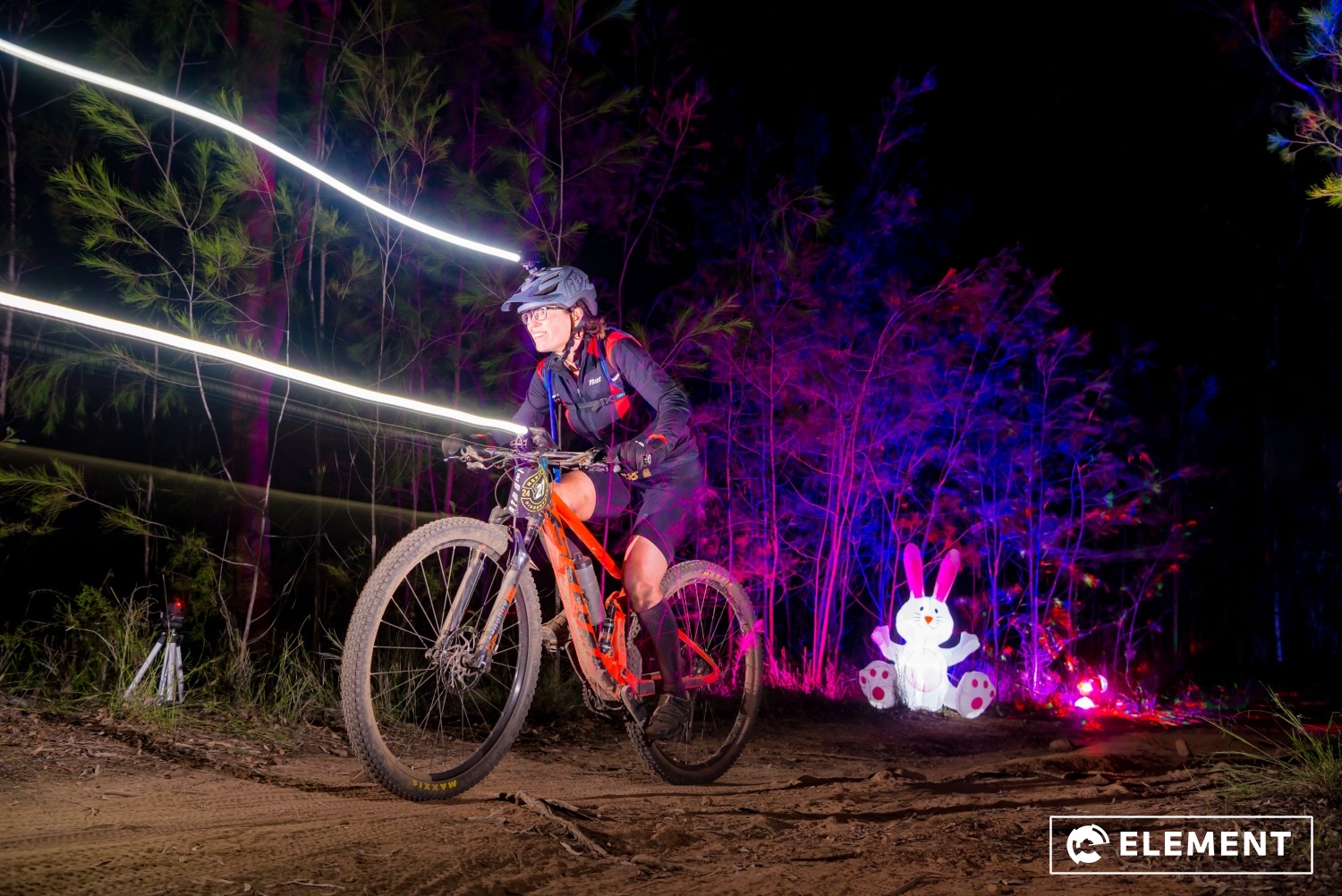 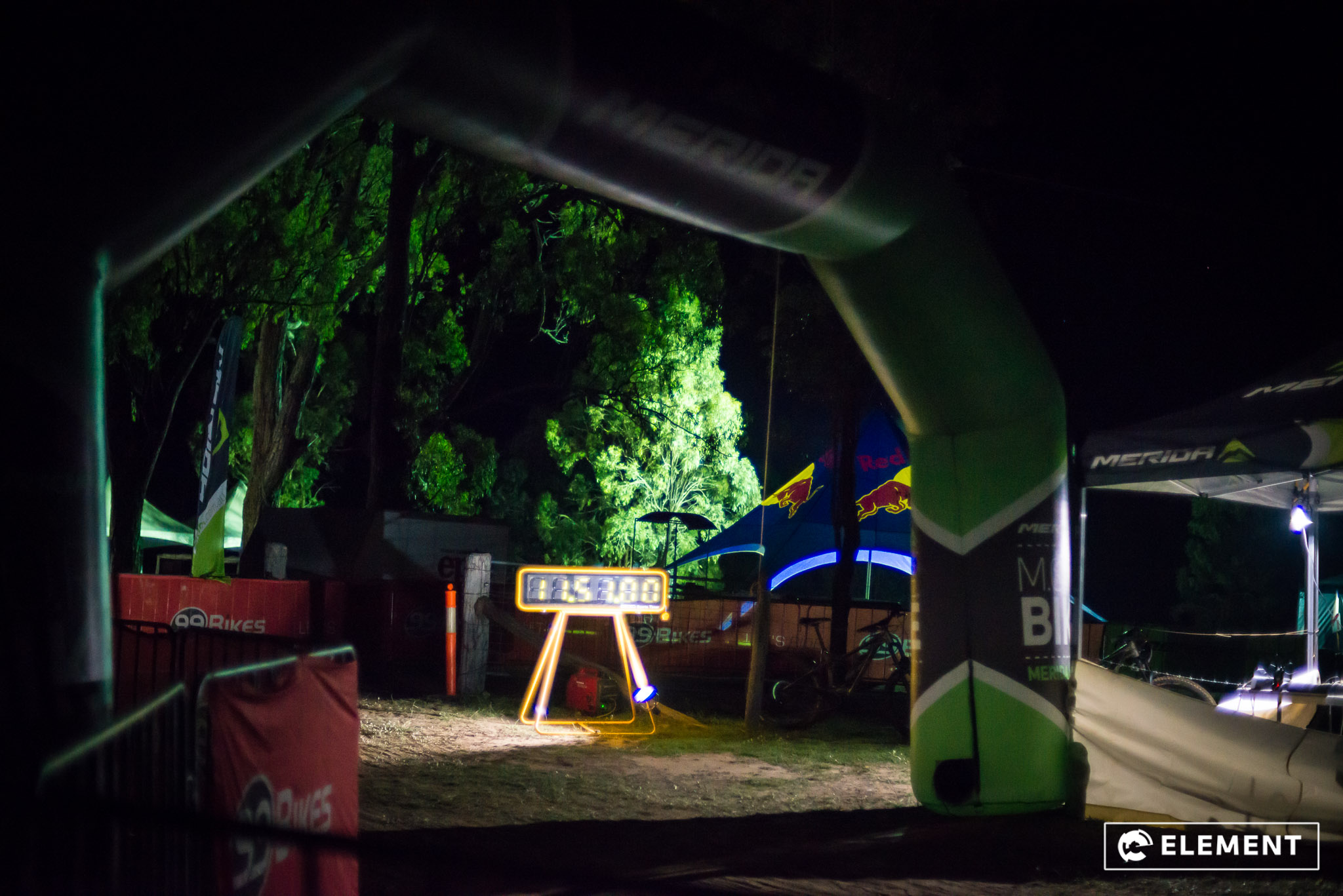 Night vision is, admittedly, not my strength. For this reason, I decided to run my lights on high which meant battery changes every lap – but after mistaking a berm for a water bar on my first lap under lights (using a lower beam) and nearly running off the track I decided it was time well spent! On one lap my bar light died half way down Rock Bottom, which proved slightly disconcerting as my headlight battery was also beginning to fade by then – massive kudos to the rider who stopped to help me change my headlight battery to the spare when my fingers refused to cooperate; the stronger beam this afforded was invaluable in getting me round safely. 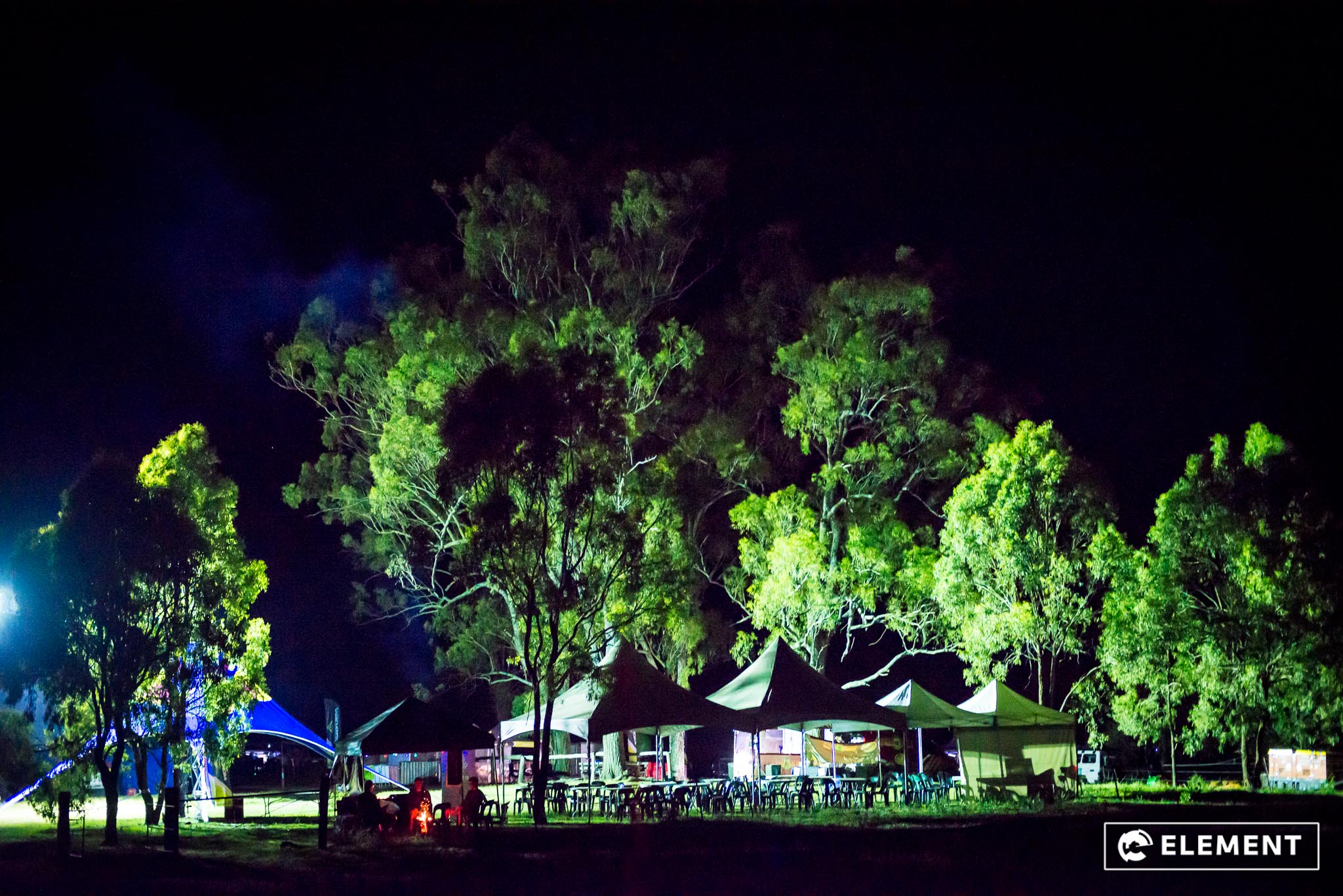 By this stage my body was tired and my lower back and arms were feeling the pummelling of the rocky track, but a couple of Panadol and a toasted Nutella white bread sandwich helped to keep my spirits high till sunrise. Food really is an amazing motivator! The other riders were also wonderful, having a quick chat as they passed me and checking how I was going – one particularly cheerful rider in a yellow and black jersey seemed to pass me a lot! “Still going, just going very slowly” became my catch cry. 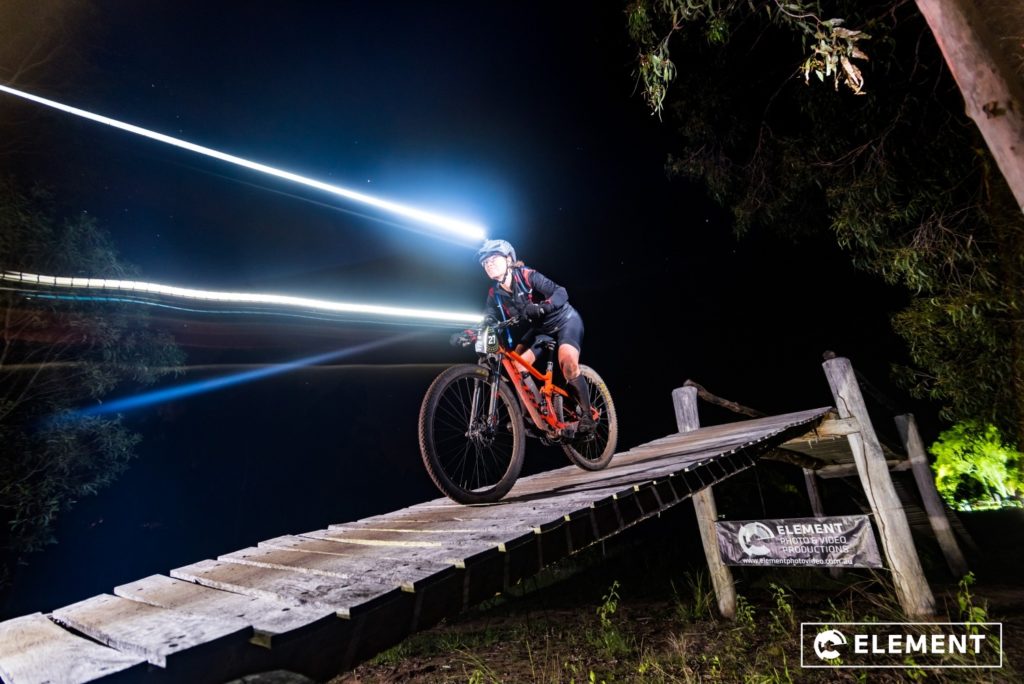 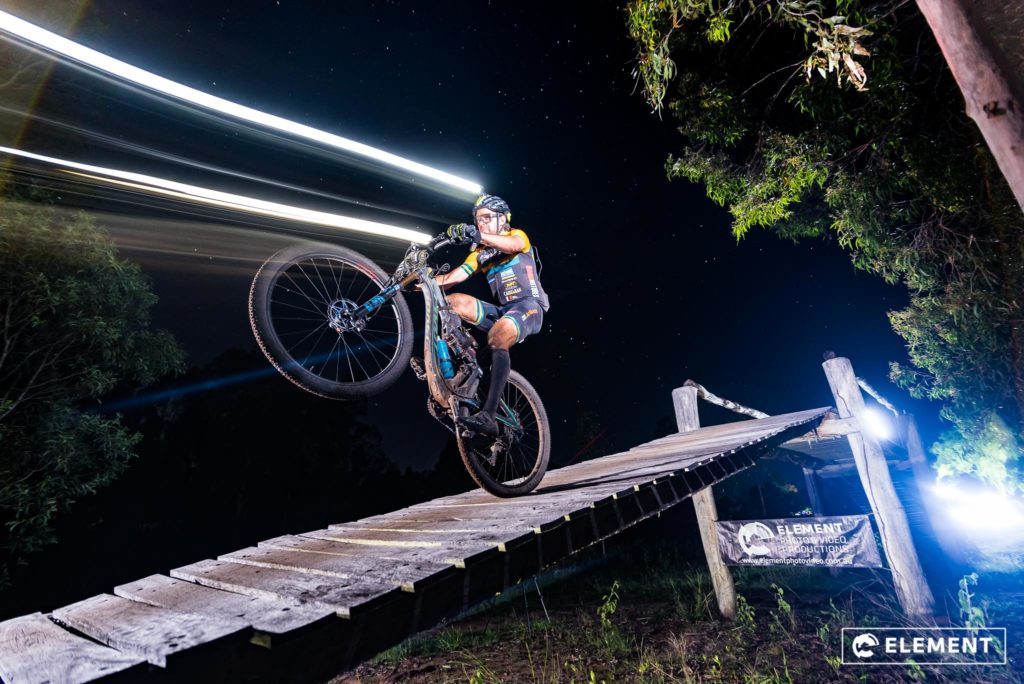 (The mysterious rider in black and yellow – Jason English, who took out the elite open men category)

Then, suddenly, the sky changed from inky black to purple and pink before exploding into orange as the sun rose over the hills. The dawn chorus started with the calls of kookaburras and then, one by one, other birds added their songs to the mix. It was completely magical – the whole race was worth it for that one lap. 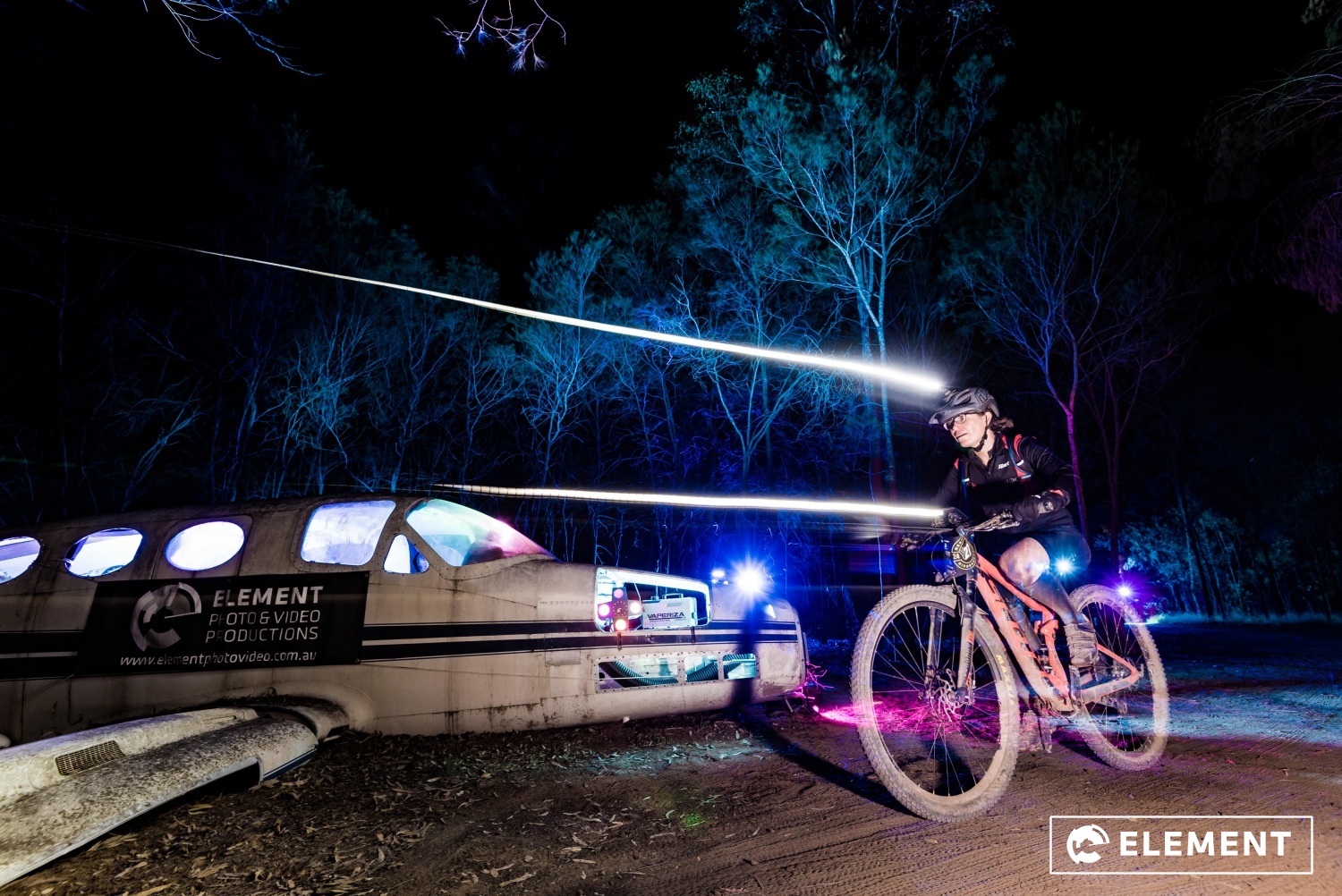 Rolling through the timing gate at the end of that lap, the clock showed there were approximately 6 hours left to go. “That’s only 4 laps”, I told myself and it seemed a very achievable goal. Half a vegemite sandwich and a few handfuls of salted crisps kept me going till breakfast (more spaghetti bolognese), and I then managed two more laps on just my Infinite and a gel. My lap times were getting longer, however, and at times I actually felt I’d go backwards if I went any slower. That final lap started to look less realistic and my spirits began to sag for the first time in the race. My body was aching and my left knee was hurting with every pedal stroke, but I knew I could push through that (very, very slowly) if I had to. “It’s ok to walk a few hills on your final lap”, I muttered repeatedly and psyched myself up to keep going. However, I also knew that my concentration was not as sharp on this lap. My reaction times were much slower and my riding was getting sloppy. The distinct possibility of crashing or falling off a bridge started to worry me – and I know from experience how quickly accidents can happen! My mind battled between wanting to keep going and self-preservation, and common sense won out. 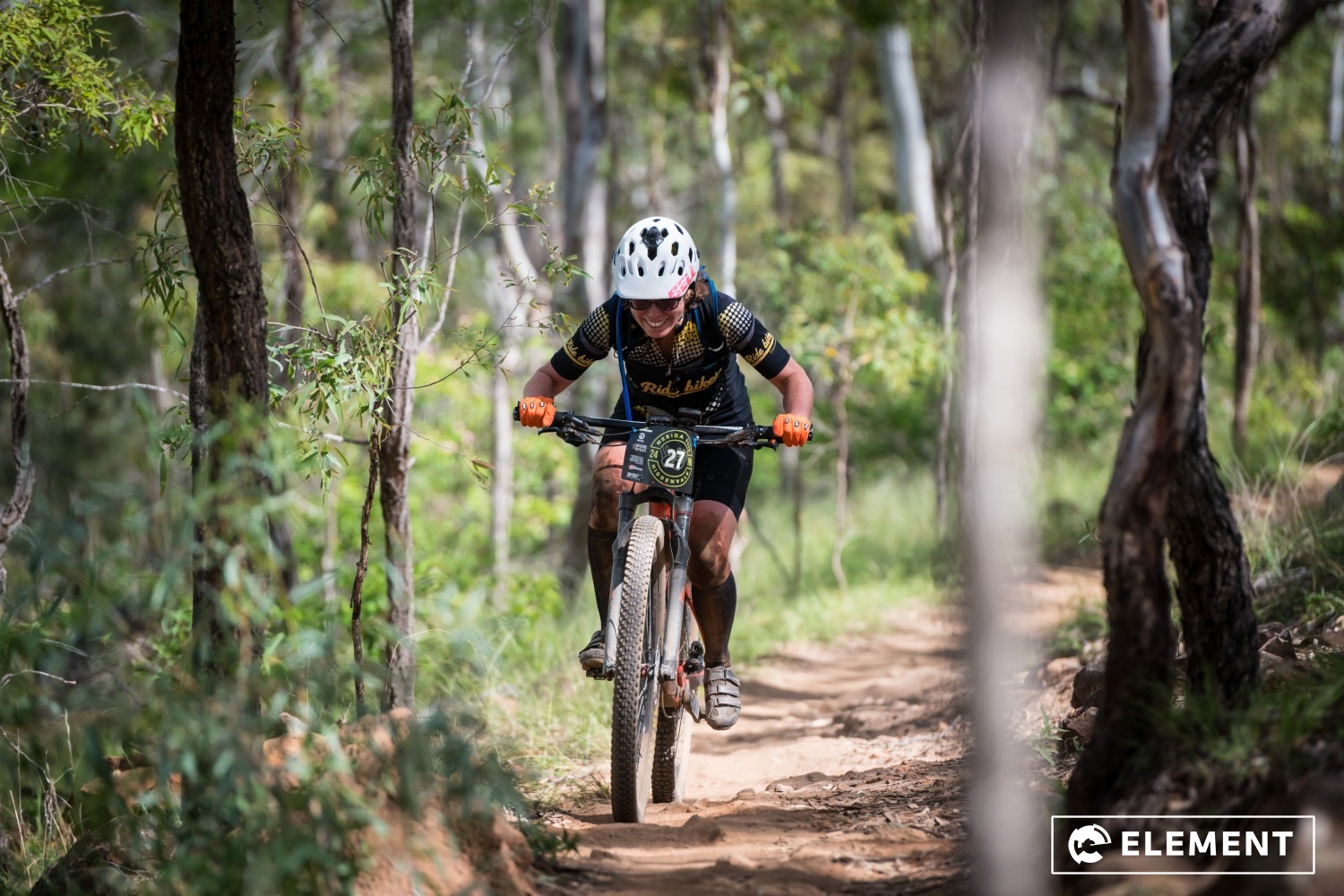 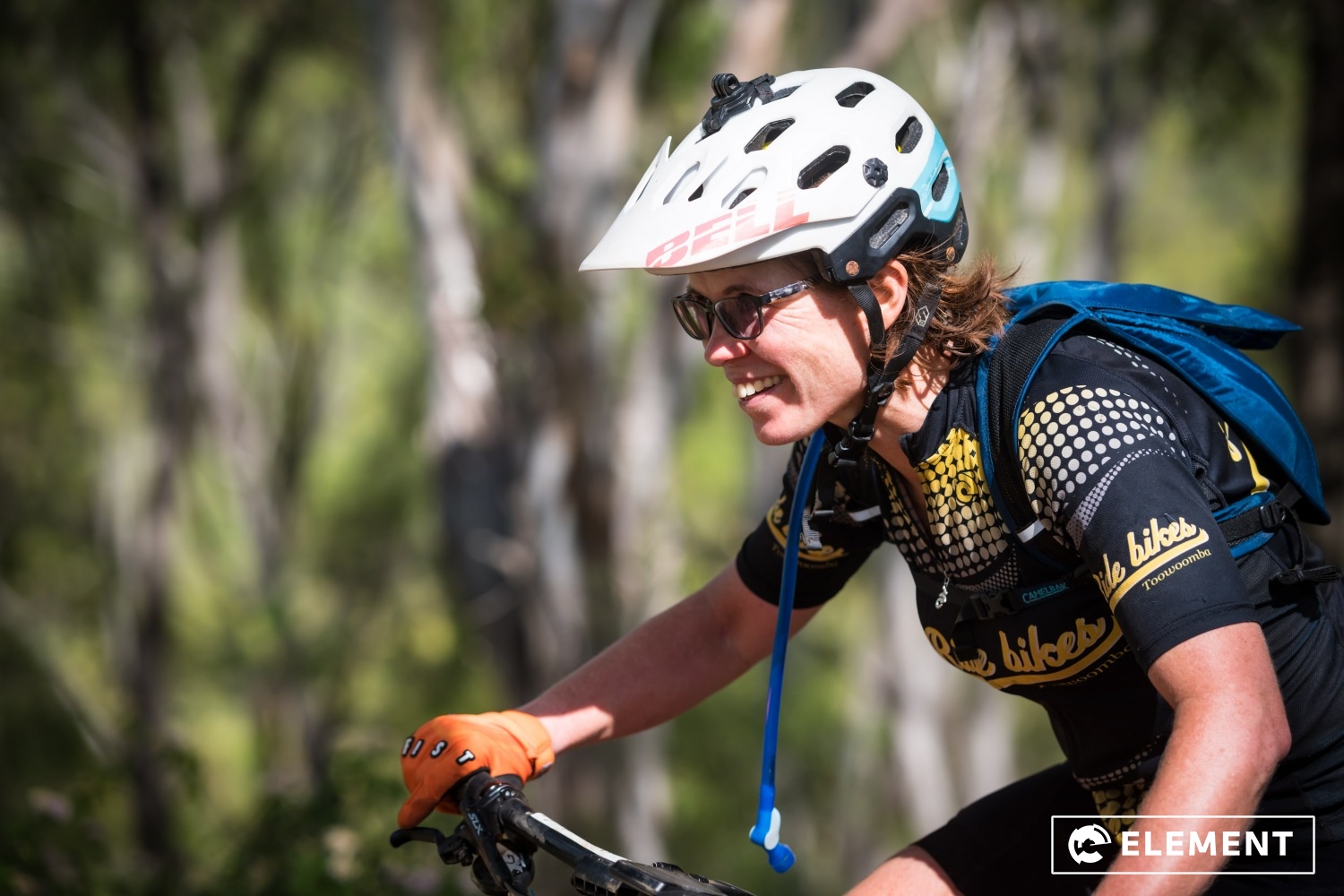 I finished my 15th lap exhausted but elated. I’d raced for 22:30 hours, ridden 231.9km and climbed over 4000 vertical metres. I’d really wanted to ride for the full 24 hours, but I am proud of what I achieved in my first attempt at a 24-hour race. It was very much a team effort, though, and I can’t thank Dylan enough for all he did – charging battery lights on rotation, having hot food ready when I rolled in, keeping tabs on my carbohydrate intake, reminding me to drink my Infinit and water as required…and all on just 40 minutes of sleep. Thank you also to the team riders and other support crews who checked in on him during the night and to the iRide team riders who kept him company. 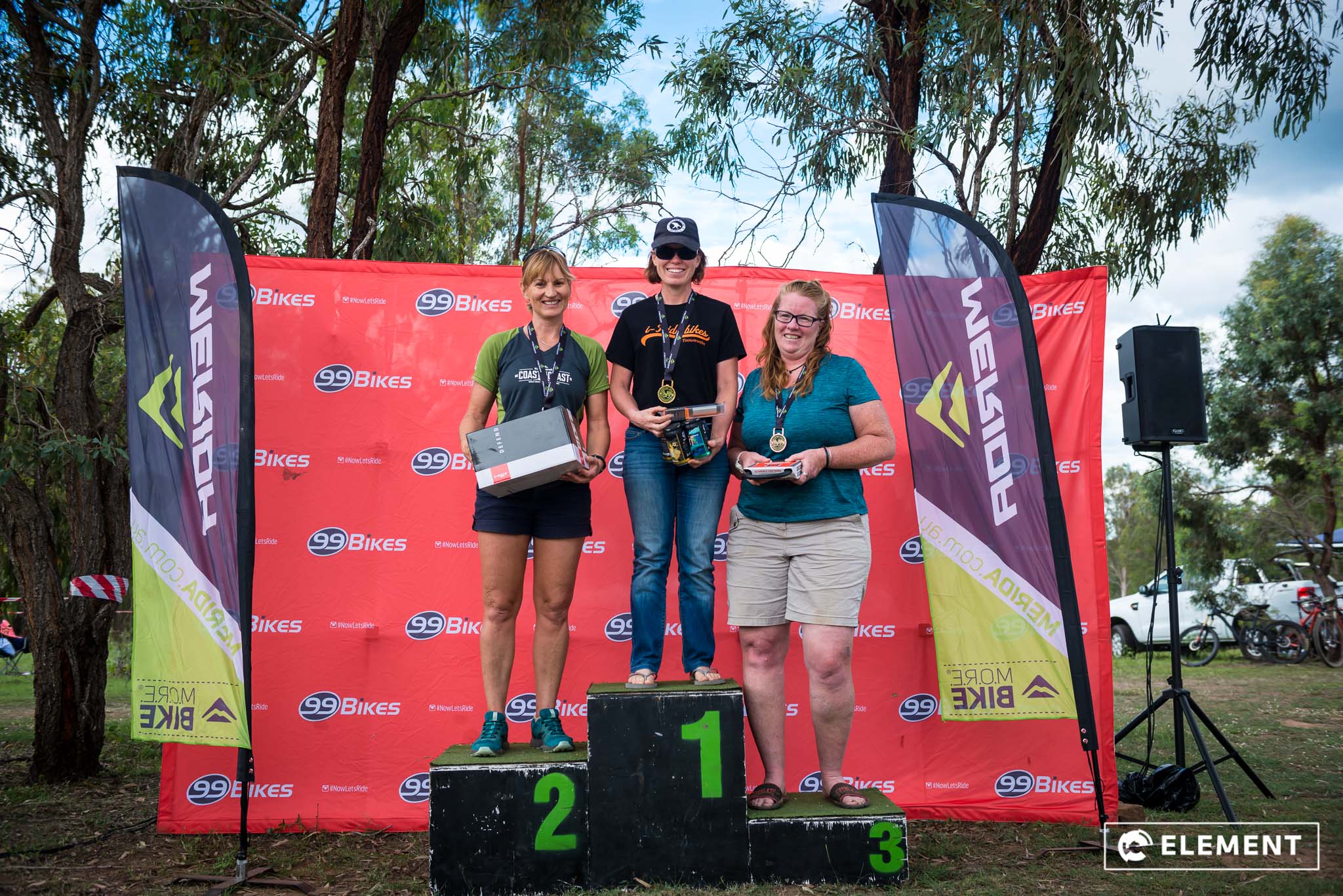 My thanks also go to the other 24-hour riders who encouraged me along the track and to the many wonderful people who cheered me trackside and in pit lane as I rode past. So awesome! Thank you, as always, to iRide Bikes in Toowoomba for supporting me on my mountain biking adventures after I decided to take up bike riding in my forties (best midlife crisis EVER). Finally, a big thank you to Hidden Vale and Merida Bikes for hosting the event and allowing me to fulfil a very large personal goal, and (of course) to Element Photo and Video Productions for their photographic record and for encouraging me to write about my experiences. Next year my goal is to ride for the full 24 hours. 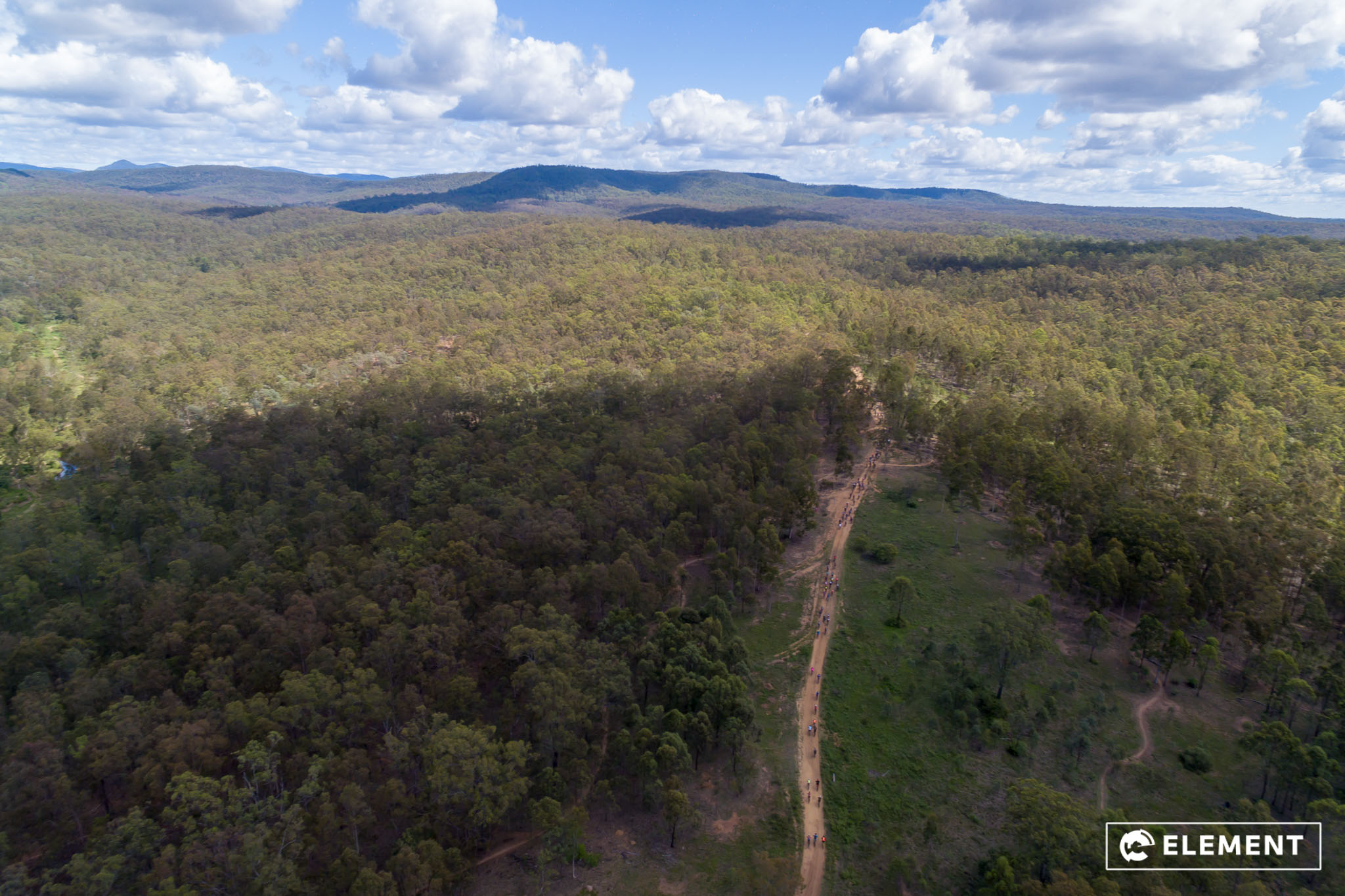 Our deepest thanks to Emma for the amazing race report. If you wish to contribute in future, please contact us.

For all the event photos, head directly here.

Don’t forget to check out all of the Hidden Vale Adventure Park events here.