The third round of the Maxxis Queensland Enduro Series took place in Tamrookum for the second time in the club’s short history. For this race report we got South East Queensland local, and Enduro World Series Stage winner, Ben Forbes, to take us through his race.

The hype for the Maxxis Queensland Enduro Series Round 3 at Tamrookum started many weeks before the event. When it comes to Gravity trails, Tamrookum Creek Mountain Bike Park is a hidden gem of South East Queensland. The privately owned park is situated on 835 acres with 270 meters elevation of mountainous terrain, built up of mostly Enduro and downhill trails. 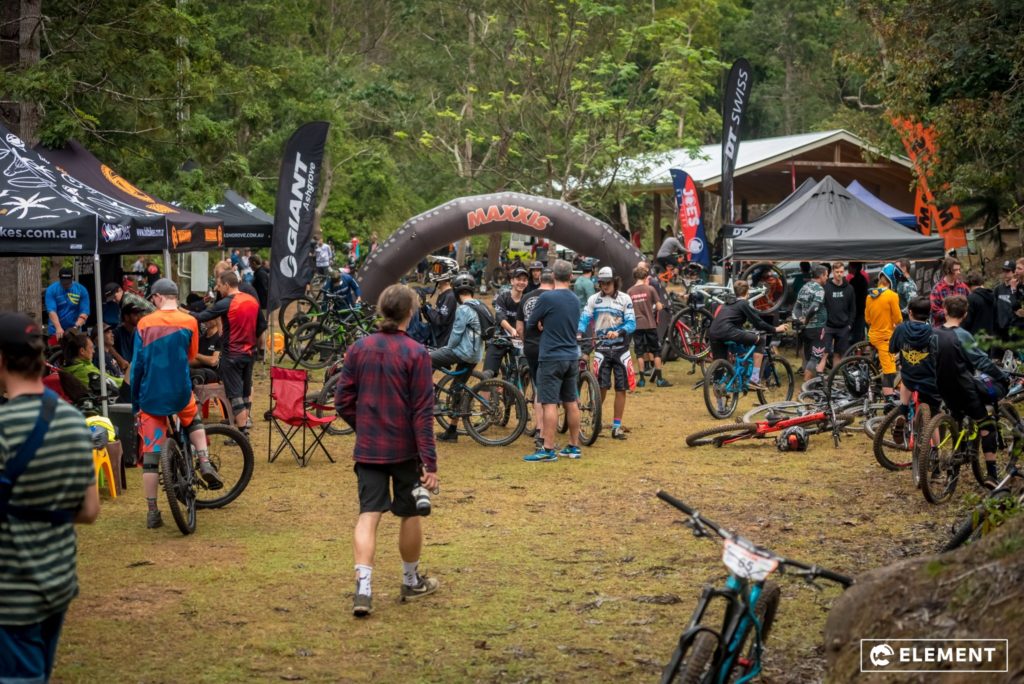 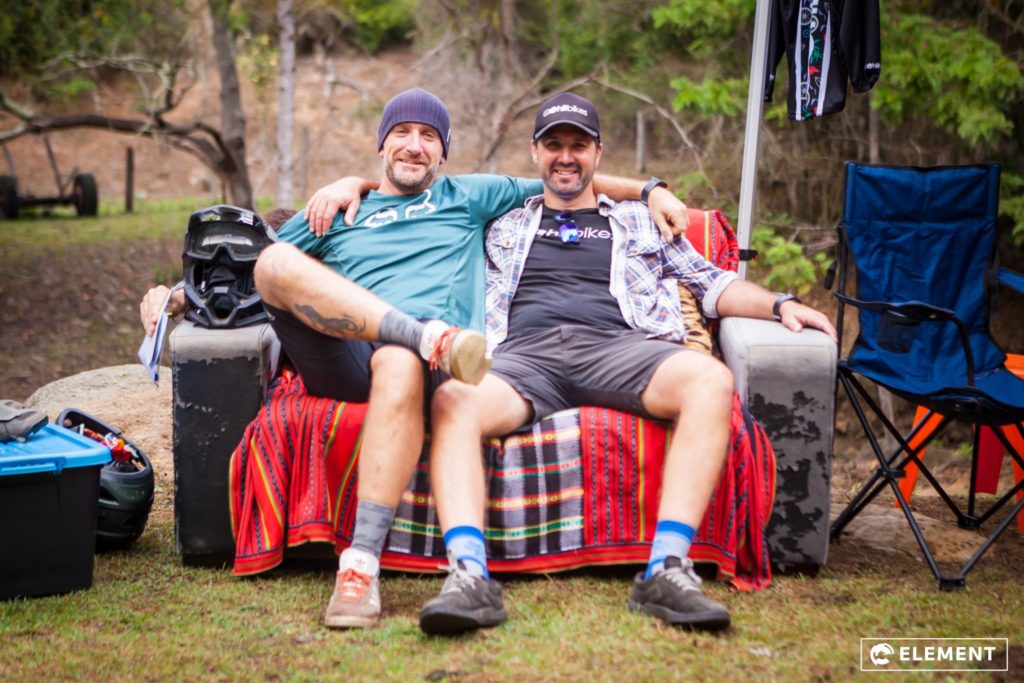 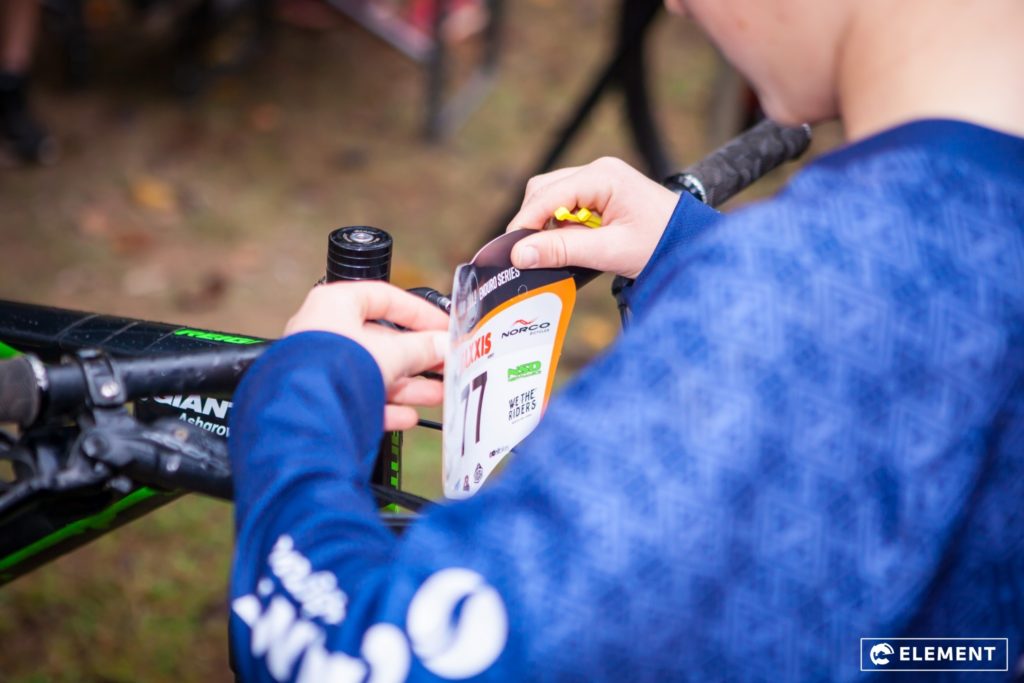 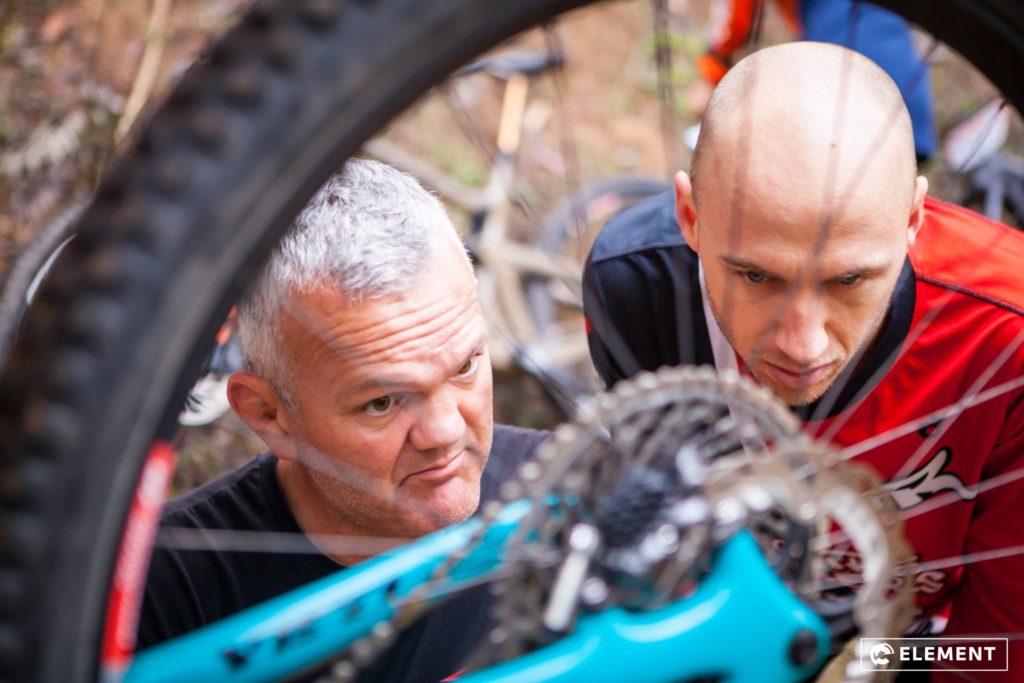 “Yeh i’ll just do 2 laps of all the stages”……I don’t think I’ve ever been so tired before a race.

The tracks here are so demanding that I felt just as tired after 8 shuttles than my 6 ride ups at the last open day.

That’s the good thing about the Tamrookum trails, they are built so interestingly that you are always riding a unique part of the trail.

It really reminds me of the Sunshine Series Brookfield downhill races. 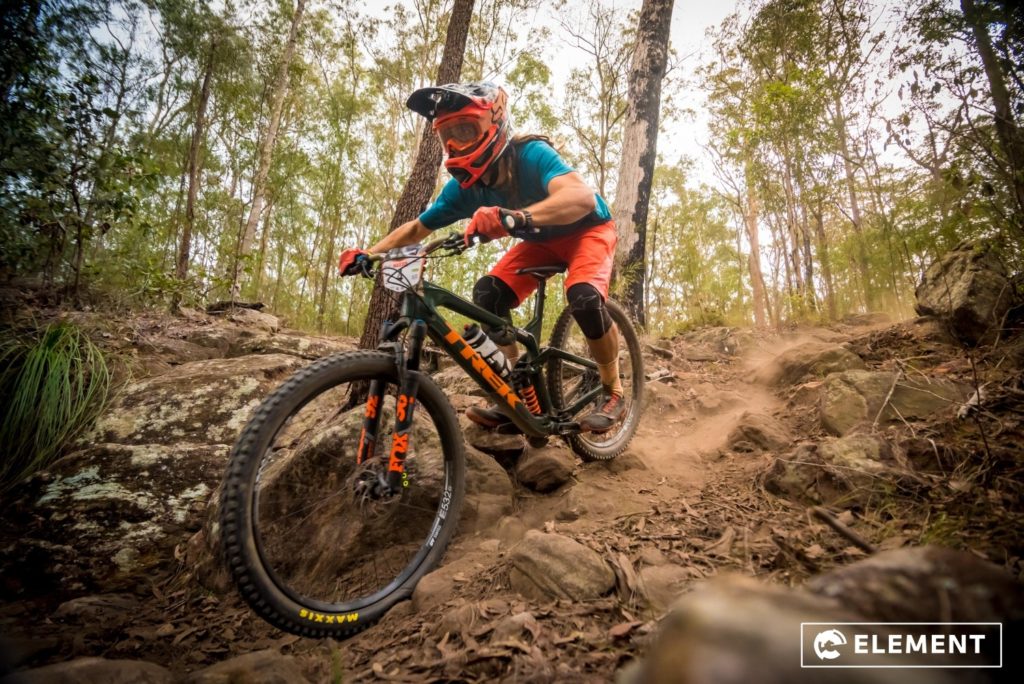 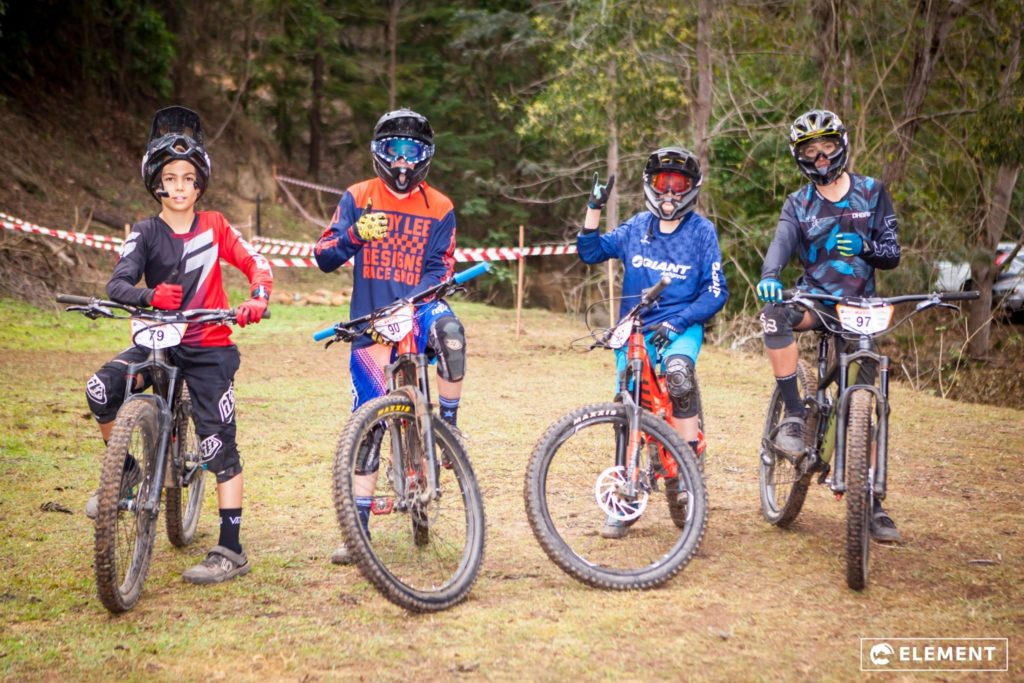 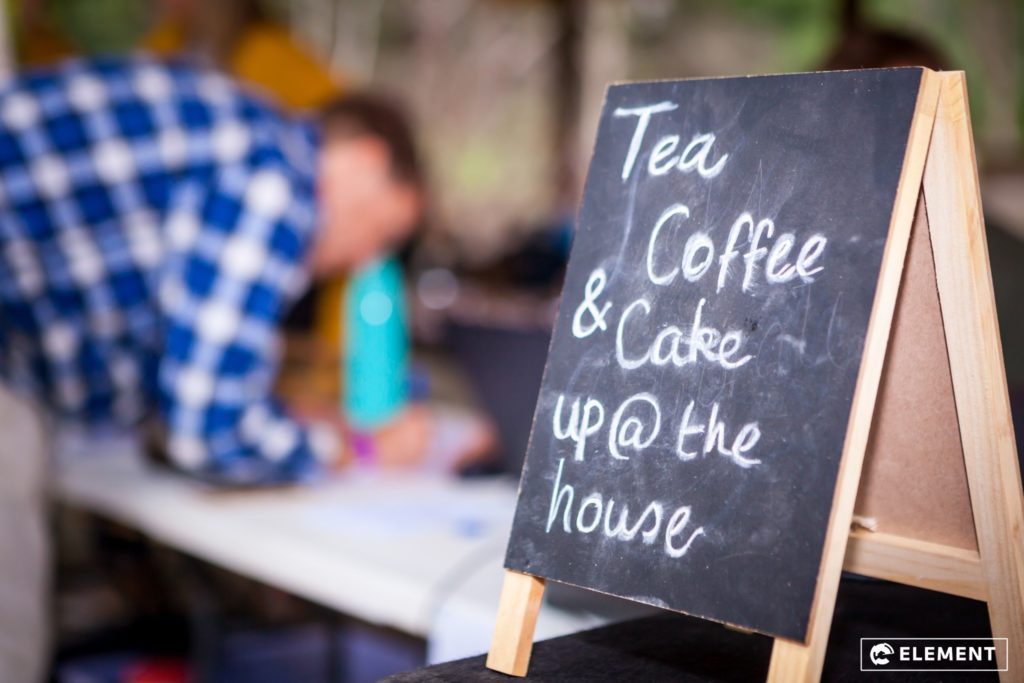 Tamrookum quickly got a reputation for having the steepest and most technical trails of the series, which unfortunately I feel, may have scared a few people away from this event. If you haven’t been to Tamrookum don’t be put off by all the talk, it’s only as hard as you make it.

Mmmmmm RACE DAY. I love the atmosphere. We all piled into the private property, got registration going, last minute bike repairs, dodging cow poo in the village, cafe pumping, a few kids sessioned the finish of some stages.

Isaac Makelainen, the director of the park got the rider briefing underway, then seconds later we were going up a 50% Gradient climb. Thankfully, that only lasts a few minutes then the climb mellows out. 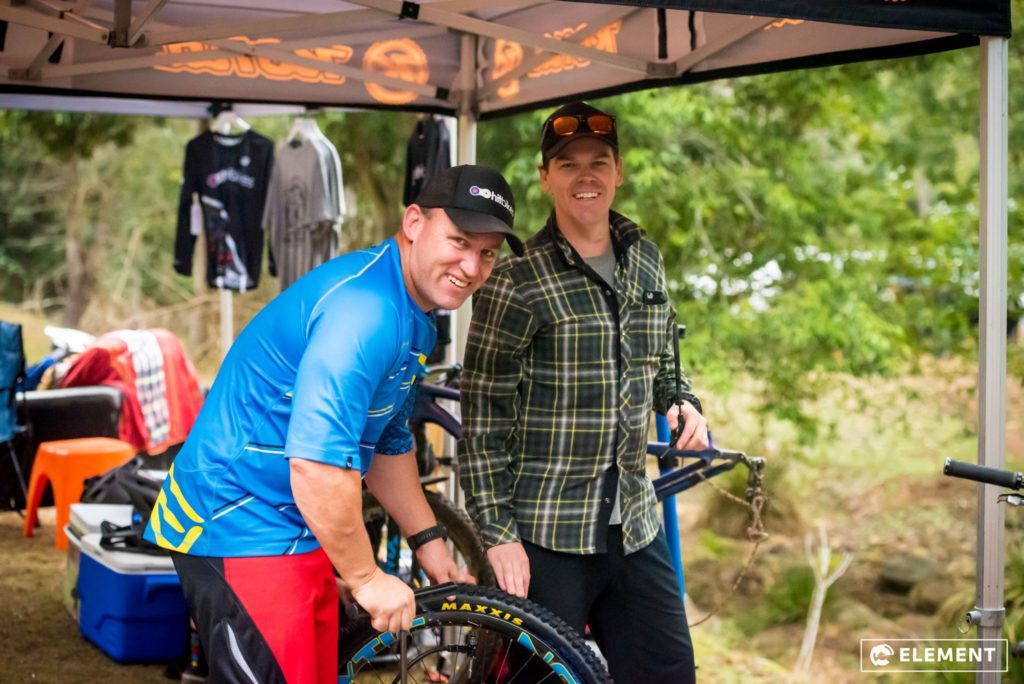 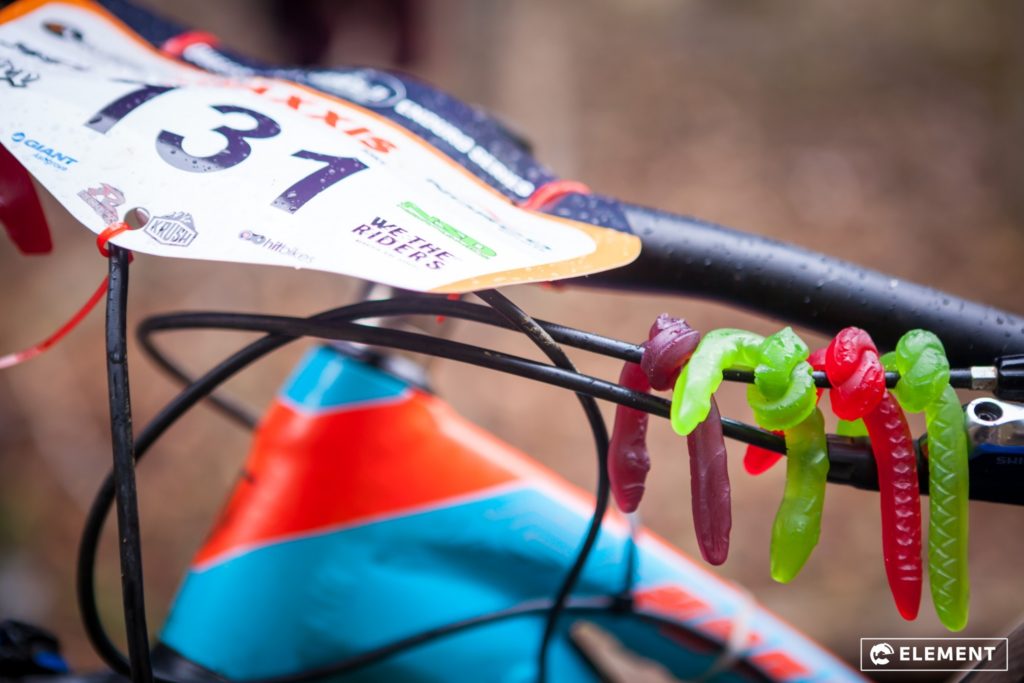 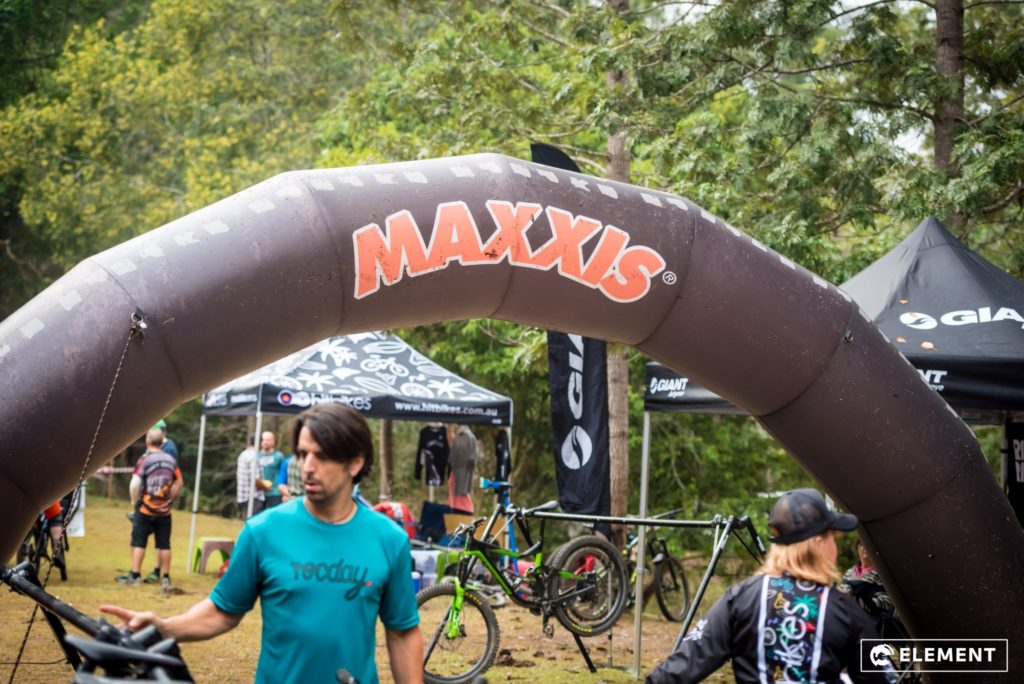 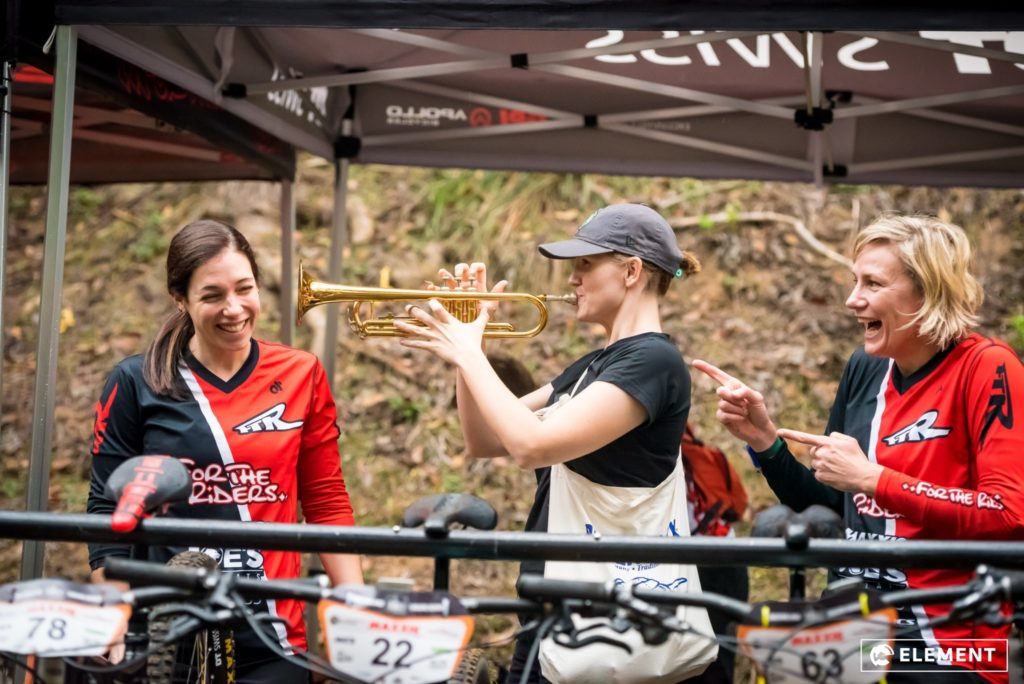 As always my goal for stage 1 is to have a clean start to a race…and not shoulder charge a grass tree like I did in practice.

The stage went for about five minutes, which is pretty long, so I chose to ride by feel rather than by remembering sections.

Similar, but with more jumps and rocks. This stage follows the shuttle road, so there was lots of spectators which is awesome if they don’t make you ride too fast!

I remember having a lot of fun sending it off the big rock. 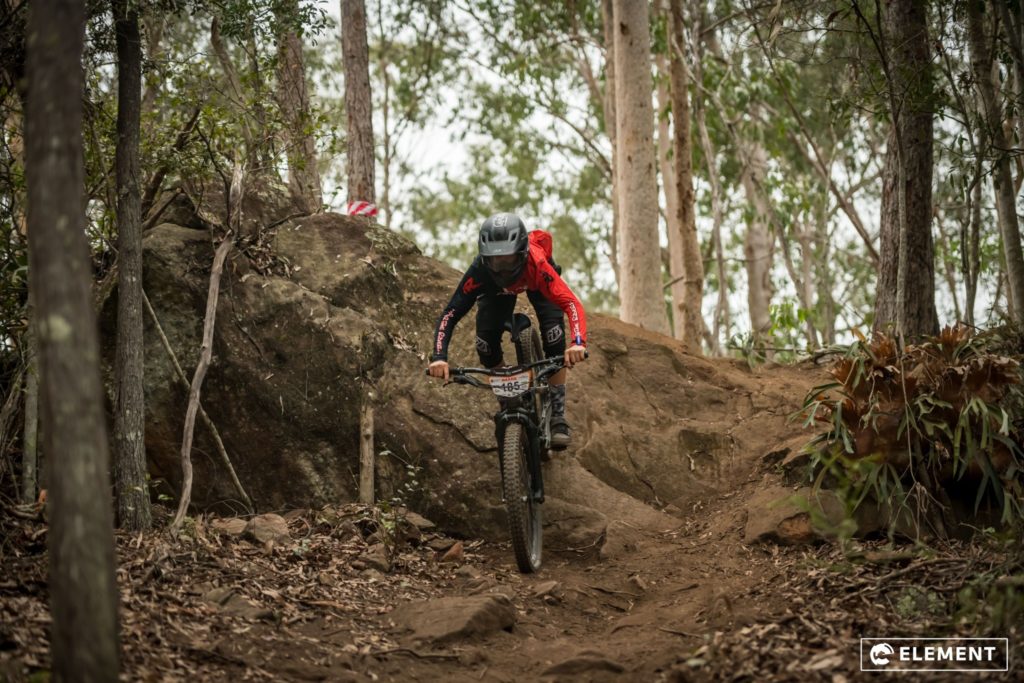 It’s a fitting name. I remember going through the first main rock garden not even picking a line because the rocks were in such a variety of shapes that I was better off going with the flow.

This stage finished with the notorious off-camber chute. And yes, it totally related to what it’s like riding in Europe ( just without the rain and roots :P).

The chute, which was perfectly located at the bottom of the village for spectators, claimed a lot of people.

If they didn’t make the last off-camber corner, they would be caught by a big bed of lantana. Awesome feature. 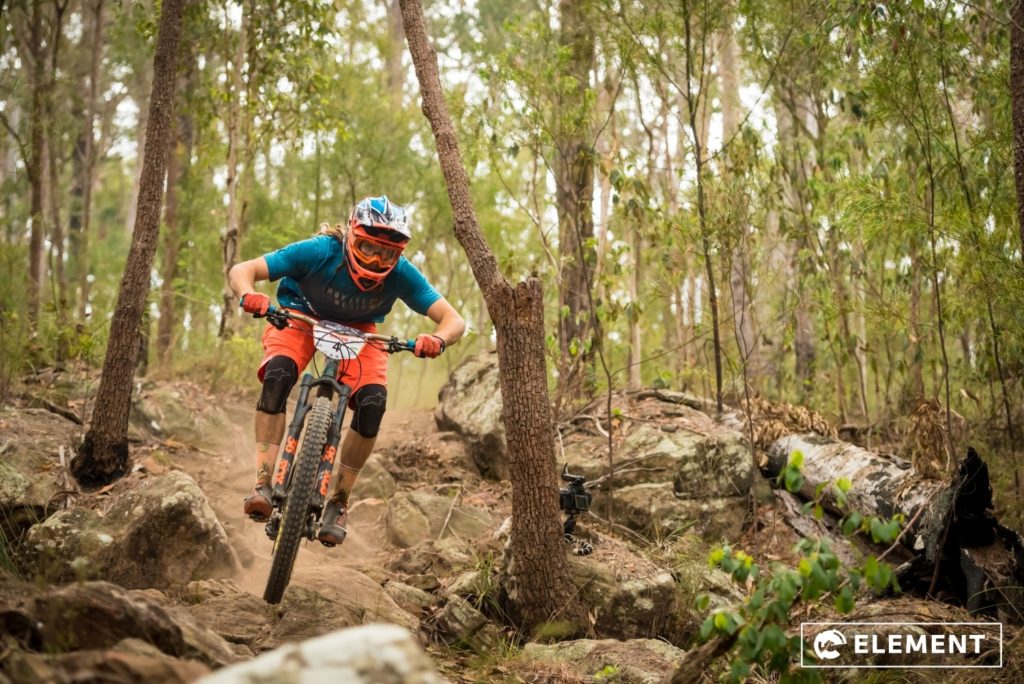 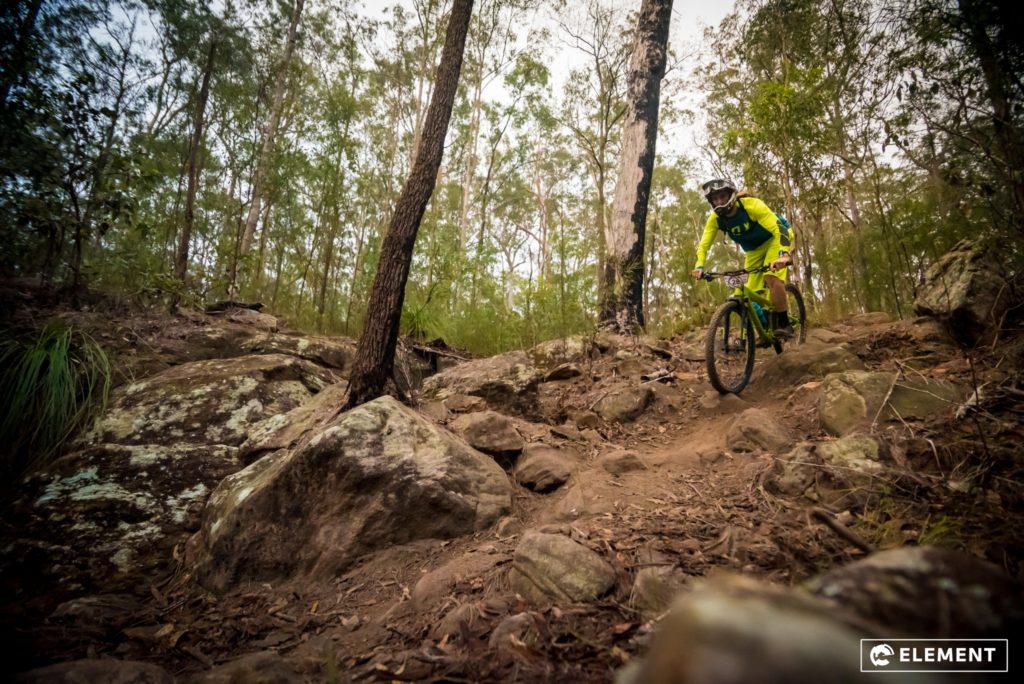 I’ve said for years “why don’t they just throw in some fire-road stage!”.

This was pretty close, 40 seconds of flat out long corners down a wide road.

This is the only stage I didn’t win, Mitchell Condner got me by 0.02! 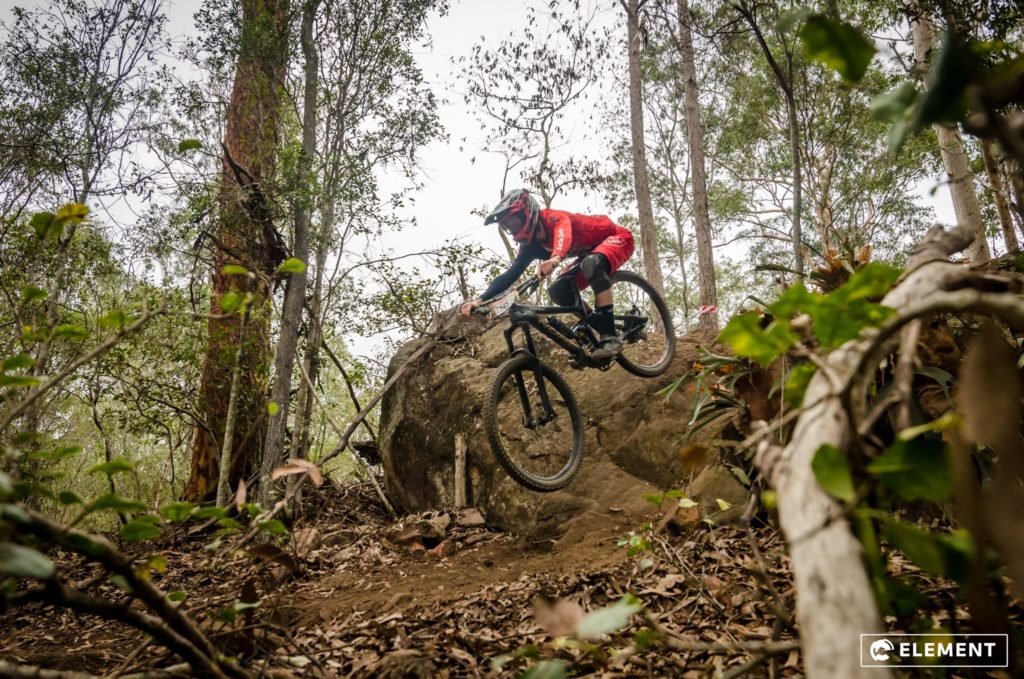 This is the stage that only the Elite Men and Women raced.

I’m not going to lie, this stage had some tough elements, that during practice I didn’t ride consistently. The track is a never ending waterfall of baby head rocks.

The first chute has a small berm to bank up on, but if you brake as you go through it, your tires slide forward off the edge instead of around the corner, so you have to just commit, lean it in, make the corner, and get through an awkward gap.

Chute 2 – There was no plan for this one! Jump up high, then hang on like you’re riding a roller coast without a seat belt. Actually feels like a waterfall of rocks zig zagging through the trees.

There was about another ten crazy sections, including a 20m flat section that was literally just baby head rocks on top of each other.

I managed to get through this without unclipping my feet which I couldn’t achieve in practice.

Stage 6 – Jib session in the village, waiting for presentations

Ben and Sam Fraser running a muck before podiums.

Stoked to win by 27 seconds on a course that was so technically demanding.

Mitchell Codner was next on the list. He has proven himself many times throughout the season.

In 3rd was “Mr Free-ride” Sam Fraser, who has the goal of beating me in Enduro because I said I would cut off my dreadlocks if he did. Sam has really stepped it up this year and I have no doubt he’s going to climb the rankings, especially if he stops doing wheelies in his race runs.

Shout out to Josh Button who was running a consistent 3rd until he smoked his derailleur on the last stage. 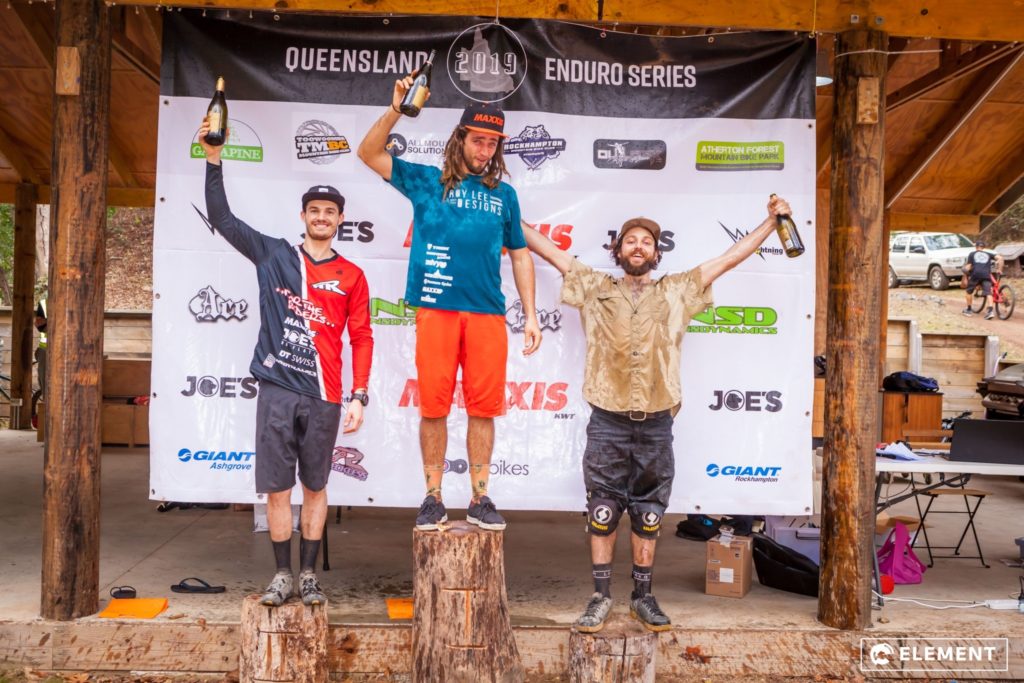 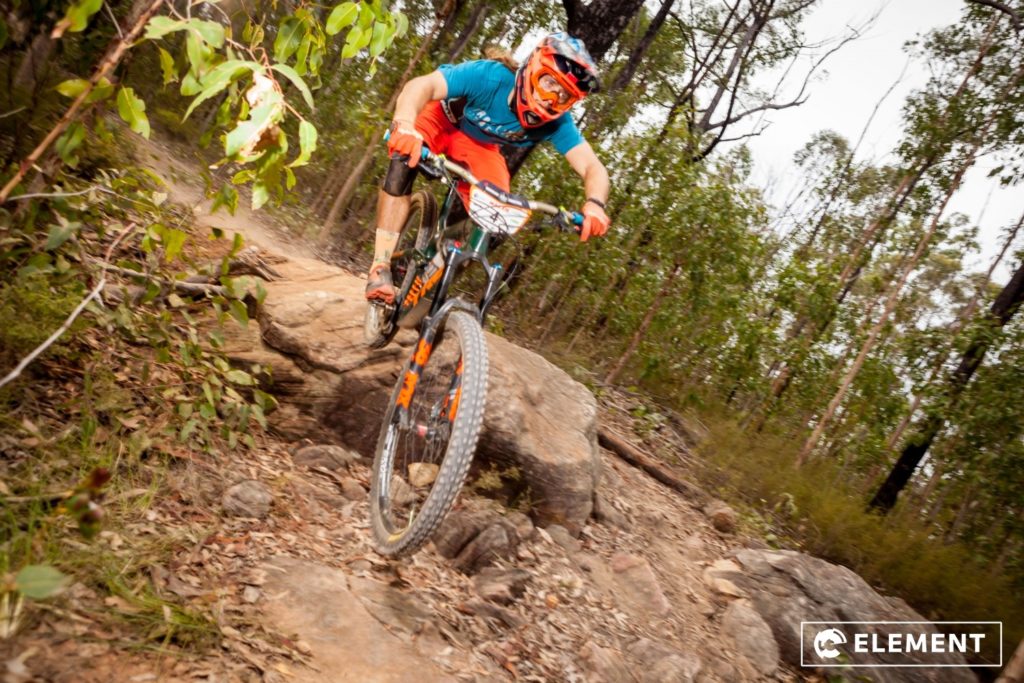 Third place in the race, but first in the champagne race, we have Annelie Marquardt. She was well up the order, before taking a face first dive down the Trap Door’s rocky chute. 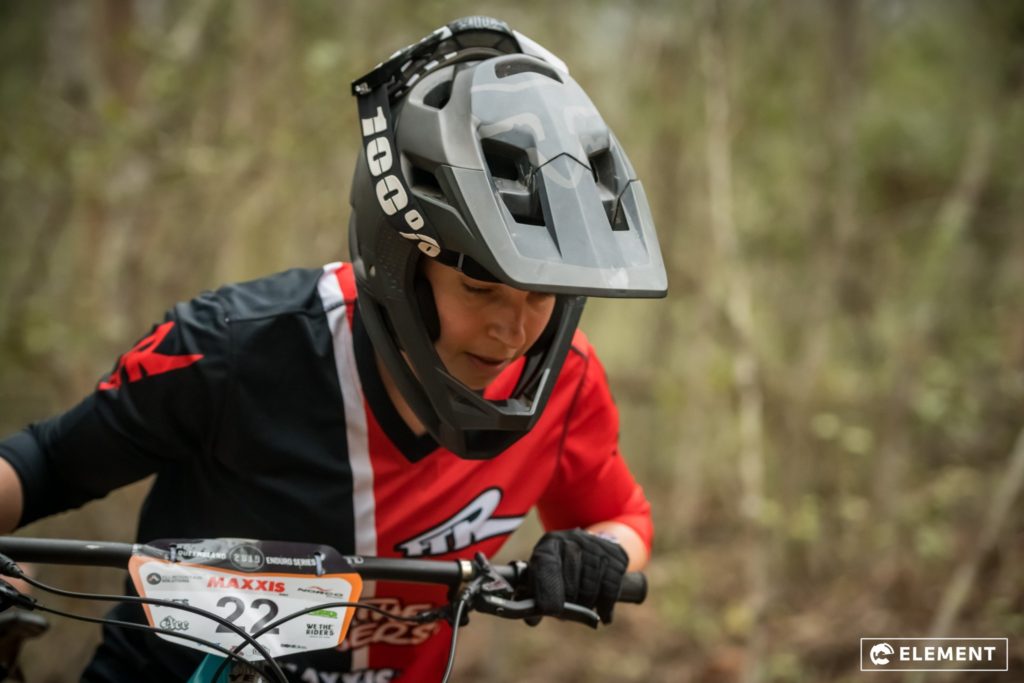 Second place was Laura Craft, who looked a little lost trying to find where to stand on the podium after winning most of her previous races. 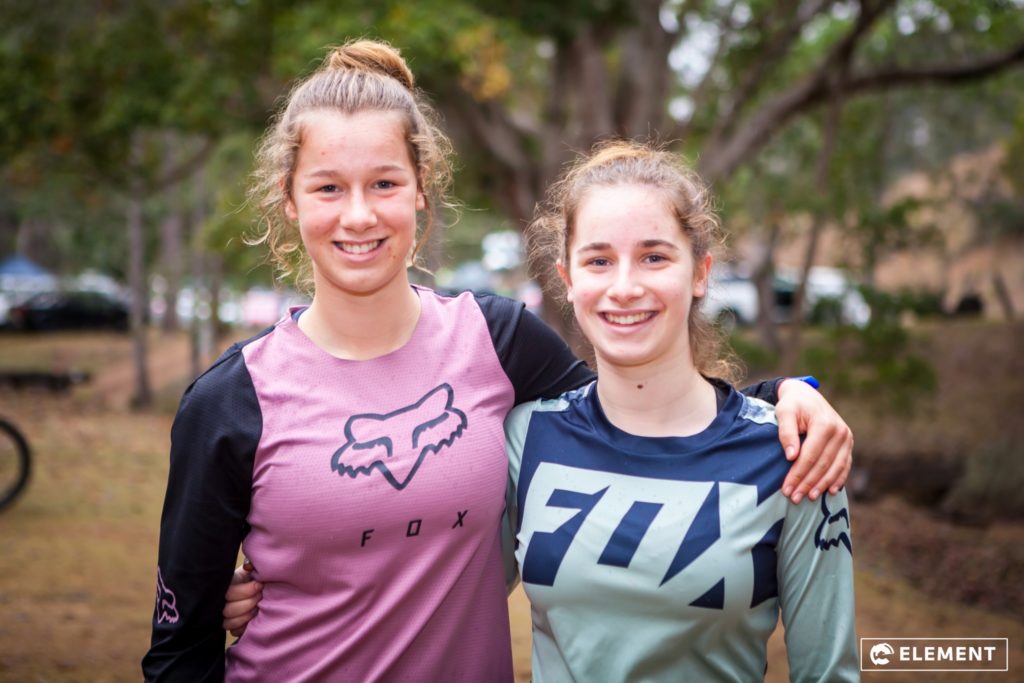 First place went to Katherine Hosking from Armidale, who brought some impressive times to the board. Not just an XC Whippet!

I had the opportunity to coach Kath. She has a great attitude on the bike and I look forward to seeing where she takes her new discipline. 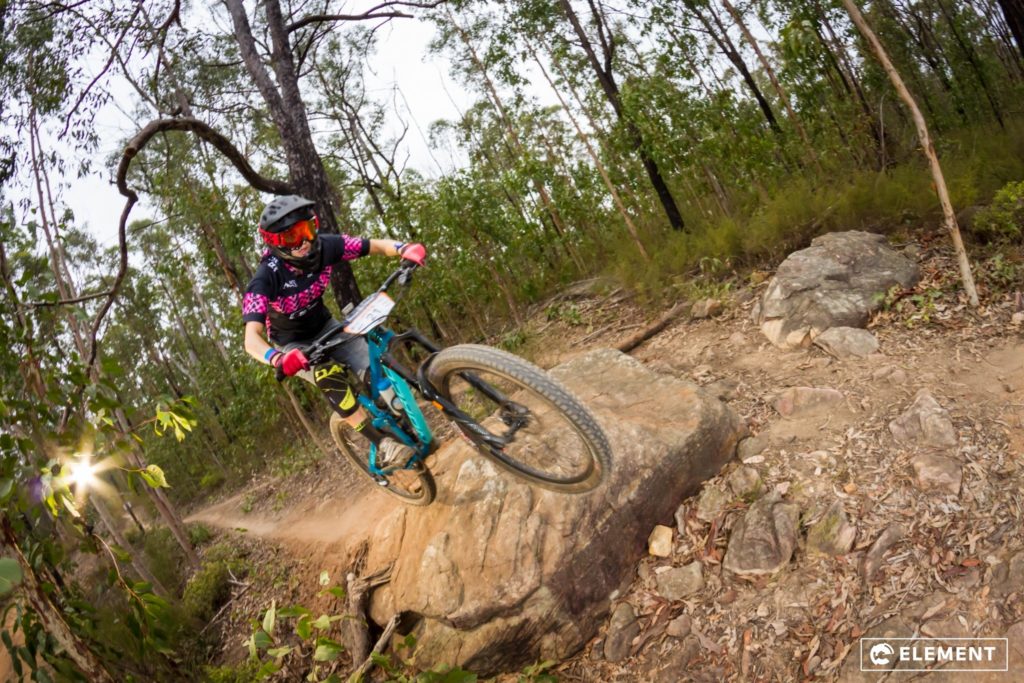 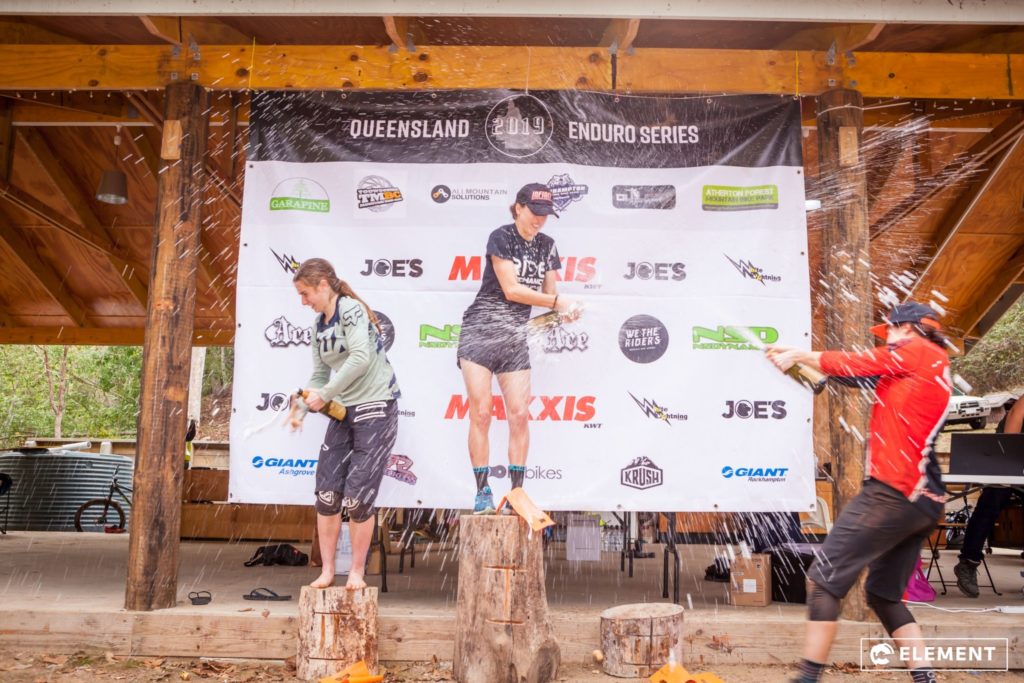 If you would like any mountain bike coaching, I’m your man! Check out ForbesMTBCourses.com 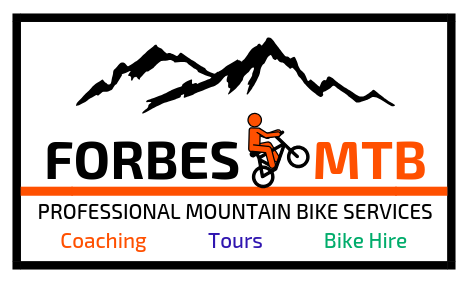 Some words from Isaac Makelainen, the man who made this memorable event happen.

“I just want thank the community for having patience with timing our first event. As a team, we just love seeing all the happy faces on race day and enjoyment of our trails and event, it’s why we do it.

For a short time in the day I got to watch the racing on Carnage Creek, seeing a rider have a crash on that infamous final chute with the next rider stopping his race run and help him up. This is great, really sums up what the mountain biking community is. We cannot wait to have you all out riding our venue again.” 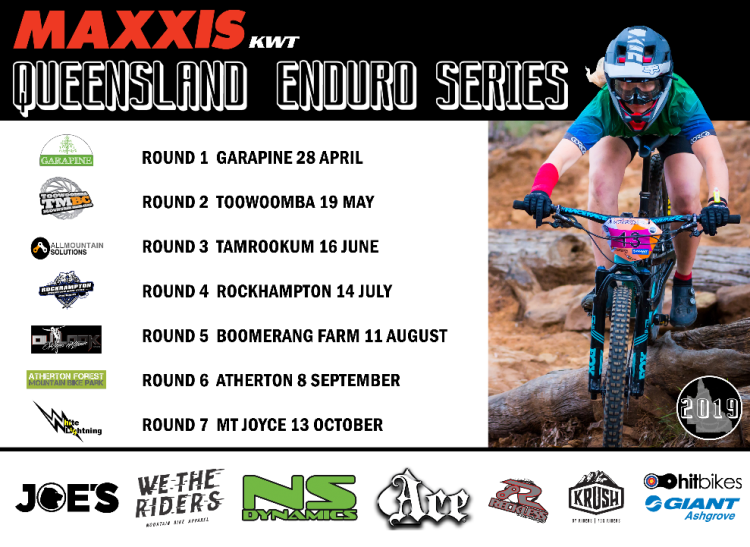 Thanks Ben! What an epic result and event!

As always, the Element team was out in force getting down and dirty on the trails. Thankfully there was a bath on site. 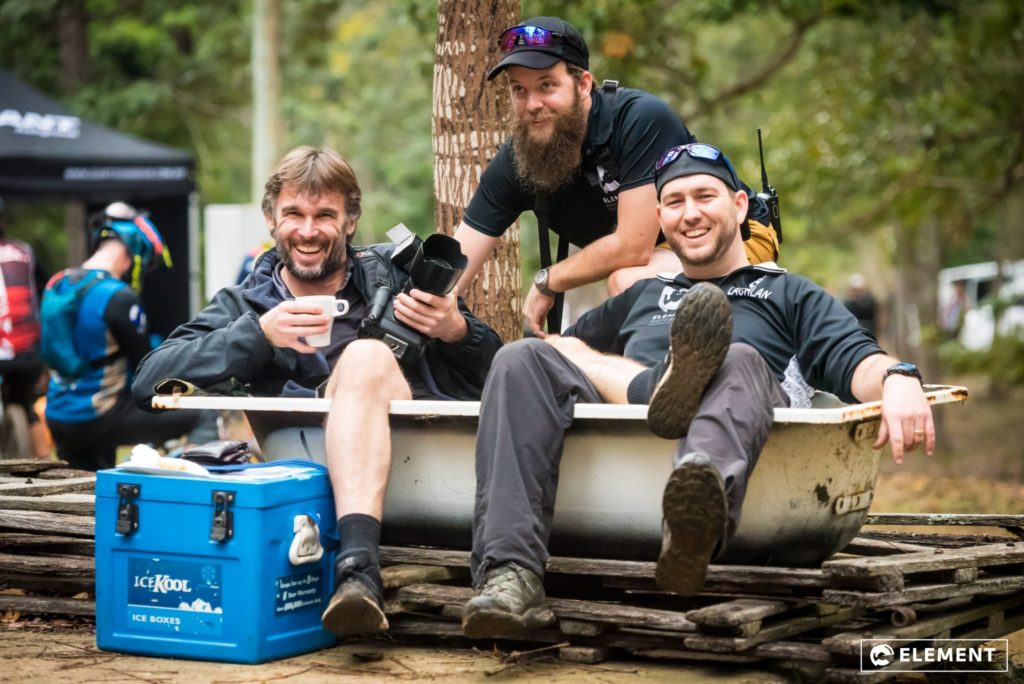 Be sure to check out the event photos on our photo gallery.